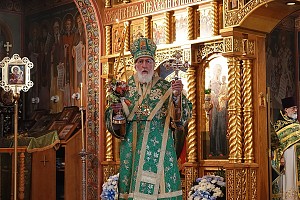 The visitation of the myrrh-streaming Hawaiian Iveron Icon of the Mother of God to the churches and monastery of the Eastern American Diocese concluded with serves at St. Alexander Nevsky Diocesan Cathedral in Howell, NJ. The icon had previously been at Holy Trinity Monastery in Jordanville, NY, where the diocesan pastoral conference was held under its aegis; and at the jubilee celebrations of Holy Dormition Convent "Novo-Diveevo" in Nanuet, NY, and St. Nicholas Church in Stratford, CT.

On Saturday evening, November 9, the myrrh-streaming icon, accompanied by its guardian, Deacon Nectarios Yangson, arrived at the church, where the All-Night Vigil was served, along with the reading of the Akathist before the Iveron Icon, all of which was led by Bishop Nikolai (Soraich). Serving alongside His Grace were cathedral rector Archpriest Serge Lukianov, Archpriests Luka Novakovic (rector of St. Michael Church in Philadelphia, PA), Rafael Melendez, Boris Slootsky, and Seraphim Chemodakov (cathedral cleric), Abbot Arseny (Manko; rector of Sts. Cosmas & Damian Church in Passaic, NJ), Protodeacons Nicholas Lukianov and Paul Drozdowski (cathedral clerics), and Deacon Alexis Golubov (cleric of St. Nicholas Patriarchal Cathedral in New York City).

The church was filled with worshippers, who came from various states, including faraway Alaska, to pray before the myrrh-streaming icon, renowned throughout the whole world and abundantly streaming myrrh in our time. Everyone prayerfully sang the Akathist to the Most Holy Theotokos. Upon completion of the service, the faithful were anointed with holy myrrh, and received small icons of the Hawaiian Mother of God.

Praying at the divine service were cathedral parishioners and faithful from New Jersey, New York, Pennsylvania, Alaska, and even Russia. They all approached the holy image with piety and offered prayers before it. A multitude of those present communed of Christ’s Holy Mysteries.

Upon completion of Liturgy, Bishop Nikolai spoke about his encounters with myrrh-streaming icon, and called on the faithful to flee to the aid of the Most Holy Theotokos and to pray to her. Fr. Nectarios spoke about miracles attributed to the holy icon, and about how we must honor the Mother of God and her holy icons.

In gratitude for his archpastoral visit and prayers, Fr. Serge presented His Grace with a new panagia.

All were then anointed with myrrh from the icon, and the faithful received cotton balls soaked through with holy myrrh, and copies of the myrrh-streaming icon.

A luncheon was held in the church hall. 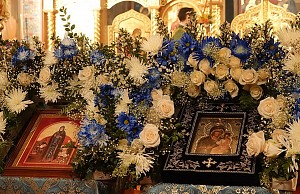