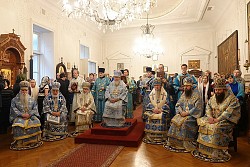 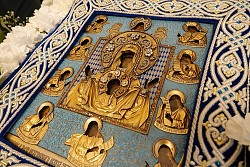 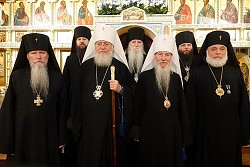 On Monday the 9th and Tuesday the 10th of December, festal divine services were held in the Synodal Cathedral of the Sign in New York City for the church’s patronal feast, in honor of the Kursk Root Icon of the Mother of God. Hierarchs of the Russian Church Abroad, having gathered to take part in a regular session of the Synod of Bishops (December 7-10), led the All-Night Vigil and celebrated Divine Liturgy.

On December 10, the First Hierarch of ROCOR, Metropolitan Hilarion of Eastern America & New York, celebrated the festal Divine Liturgy, co-served by Archbishops Mark of Berlin & Germany, Kyrill of San Francisco & Western America, and Gabriel of Montreal & Canada, and Bishops Irenei of London & Western Europe, George of Canberra, and Nicholas of Manhattan. Concelebrating with the hierarchs were cathedral and visiting clergy:

Praying in the altar was the Chancellor of the Synod of Bishops, Archpriest Serafim Gan.

The cathedral choir sang the services triumphally and prayerfully, under the direction of Protodeacon Vadim Gan.

After the Eucharistic Canon, Metropolitan Hilarion ordained Subdeacon Stefan Stoyanov to the diaconate. The newly ordained Deacon Stefan will fulfill his obedience at the Synodal Cathedral.

The festivities were also timed to celebrate the 35th anniversary of Metropolitan Hilarion’s hierarchal consecration. Despite its being a weekday, the church was filled with worshippers. A multitude of the faithful gathered in the cathedral in order to pray before the wonderworking Protectress of the Russian Diaspora, and to congratulate Metropolitan Hilarion on his jubilee.

Upon completion of Liturgy, Metropolitan Hilarion greeted those gathered with the feast, and noted that it was particularly joyful for him on that day to honor Archbishop Mark; he asked the Vice Secretary of the Synod of Bishops, Bishop Nicholas of Manhattan, to read aloud a directive, after which His Eminence elevated Archbishop Mark to the rank of Metropolitan, for his particular labors on behalf of Christ’s Church, his many years of archpastoral service, and unto the prestige of the Diocese of Germany, of which he is the ruling bishop. The petition of the First Hierarch to elevate Archbishop Mark to metropolitan on the occasion of the approaching 40th anniversary of the latter’s hierarchal service was heard by a session of the Synod of Bishops on June 28, 2019 in San Francisco, and was discussed with the entire synaxis of bishops of the Russian Church Abroad, who approved it unanimously.

In response, Metropolitan Mark thanked the bishops for this high honor bestowed upon the Diocese of Germany, and said, in part:

"Every feast of the Kursk Root Icon is a great feast for our entire Church. But this year, we have a dual feast, because we celebrate also the 35th anniversary of our First Hierarch’s episcopal service. The feast of this icon, which is celebrated throughout the Church Abroad, is now shared in Russia. In the 12 years since the Kursk Root Icon, with the blessing of the Synod of Bishops, has been visiting various Russian dioceses, the veneration afforded to this holy icon has grown even greater."

Metropolitan Mark greeted Metropolitan Hilarion, congratulated him on 35 years of hierarchal service, and read aloud a greeting to His Eminence, signed by all of the members of the Synod of Bishops of the Russian Church Abroad, wherein they offered their prayerful wishes for the First Hierarch’s good health and strength, in the hope that the Lord will lead His Eminence "to even greater, rarer anniversaries, including the 50th anniversary of his archpastoral service."

Directives were then announced awarding the Synodal Order of the Kursk Root Icon of the Sign, 2nd Class. By petition of the President of the Synod of Bishops, taking note of their diligent labors and in honor of the 10th anniversary of the first return of the Kursk Root Icon to Russia since the 1920s, the Order was presented to: Vice Secretary of the Synod of Bishops, vicar and secretary of the Eastern American Diocese, Bishop Nicholas of Manhattan; Chancellor of the Synod of Bishops and rector of St. Seraphim Memorial Church Archpriest Serafim Gan; and dean of Long Island & the Hudson Valley, rector of Holy Virgin Intercession Church in Glen Cove, NY, Archpriest Alexandre Antchoutine.

After the service, a reception was held in the cathedral hall for the clergy, parishioners, and guests, during which the secretary of the Patriarchal Parishes in the USA, Abbot Nicodemus (Balyasnikov), read aloud a jubilee greeting from Patriarch Kyrill of Moscow & All Russia to Metropolitan Hilarion. The address says, in part:

"The Lord deigned for you to bear the lofty and greatly responsible episcopal service. Standing for many years before the throne of the Heavenly King, the Altar, and performing the Holy Eucharist, you offer up supplications, prayers, intercessions, and giving of thanks, for all men (I Tim. 2:1).

"Now First Hierarch of the Russian Church Abroad, you take care for the development of parish life in the vineyard that was entrusted to you, speak to those near and far the wisdom of God in a mystery, even the hidden wisdom, which God ordained before the world unto our glory" (І Cor. 2:7).

His Holiness wished the Metropolitan spiritual and physical strength, peace, and unfailing mercy from Christ, the Lover of mankind.

Those present at the reception also wished Metropolitans Hilarion and Mark blessed success in their hierarchal labors, and many years. 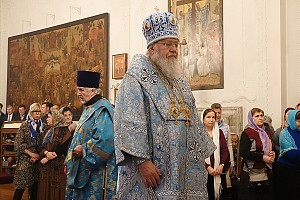