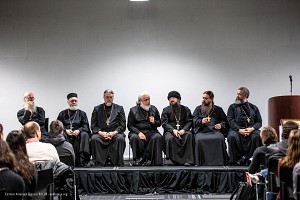 On Wednesday, December 25, following Divine Liturgy in Holy Epiphany Church, the work of St. Herman Youth Conference continued in Boston, MA. Attendees engaged in workshops that strengthened their understanding of their Orthodox Faith, and touched on how to become more active parishioners and how to balance one’s beliefs in a secular world.

Between workshops, the youth were able to interact with diocesan clergy in an informal atmosphere. This level of interaction enabled the youth to discuss with the priests the various issues in their lives, pose questions on how to be a better Christian, or simply reconnect in a setting sometimes more comfortable than in a parish environment.

In the afternoon, conferencegoers were given the opportunity to ask questions of interest to them. A panel of clergy led by Archbishop Gabriel answered the various questions, ranging from help in finding a spiritual father to preparing for marriage, and regarding current ecclesiastical issues in the Orthodox world.

Later that night, conference participants competed in the longstanding St. Herman Conference traditional talent show. Before it began, Archbishop Gabriel relayed the decision of the Executive Committee to hold the next year’s St. Herman Youth Conference in New York City at the Synodal Cathedral of the Sign, coinciding with the jubilee year of the Centennial of the Russian Church Abroad.

Early on Friday morning, December 27, the youth departed to their home parishes. 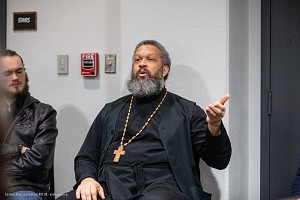