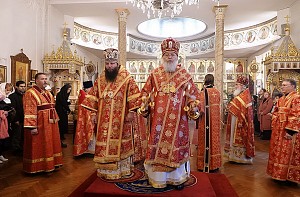 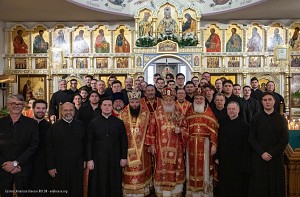 The service was held the aegis of the wonderworking Kursk Root Icon of the Mother of God.

Singing magnificently at Liturgy was a combined male choir, consisting of singers from the Tsar Nicholas II Choir (New York, director Adrian Fekula), The Russian Orthodox Male Choir of Australia (Sydney, Australia, directed by Nektary Kotlaroff) as well as other choristers. Singing in the choir were Protodeacons Vadim Gan (cathedral cleric) and Alexander Kotlaroff (cleric of the Diocese of Australia), and Deacon Michael Pavuk (cleric of St. John the Baptist Cathedral in Mayfield, PA).

The church was filled with worshippers, most of whom confessed their sins and communed of Christ’s Holy Mysteries.

Addressing the faithful with a sermon was Fr. Serge Lukianov, who spoke about the meaning of the feast of the Conception by the Righteous Anna of the Most Holy Theotokos. Fr. Serge called on the faithful, despite whatever difficulties they may be facing in life, never to lose hope, to pray fervently, to rejoice, and to hope that, through faith and prayer, we will receive the joy of salvation.

Upon completion of the service, Bishop Nicholas thanked Metropolitan Hilarion, the clergy, and the altar server or their joint prayer. He congratulated Frs. Nicholas Mokhoff and Nicholas Ilyin with their recent namesday, and wished them well strength and fortitude in their labors. His Grace called on the faithful to labor during the fast, in order to worthily greet the radiant feast of Christ’s Nativity. The bishop noted the joy the clergy felt from the singing of the male choir of the Dioceses of Australia & New Zealand and Eastern America, which included singers from the Patriarch Tikhon Russian-American Music (PaTRAM) Institute, the Mid-American, Western American, and Canadian Dioceses.

The sisterhood organized a luncheon in the cathedral hall for the clergy, singers, and parishioners, upon completion of which a remarkable spiritual concert was held by the male choir.

The choir’s director, Nektary Kotlaroff (himself a student of renowned Moscow director Vladimir Gorbik) spoke about how, on May 4, 2018, he and Adrian Fekula (director of the Tsar Nicholas II Choir) agreed to prepare a joint concern at the Synodal Cathedral. But in order for 20 singers to travel to the U.S., funds had to be raised. Since that time, the choir began performing spiritual concerts at diocesan parishes; on Monday evening, the choir rehearsed for 3-4 hours.

By the recommendation and with the blessing of Bishop George of Canberra, the choir was named "The Russian Orthodox Male Choir of Australia." 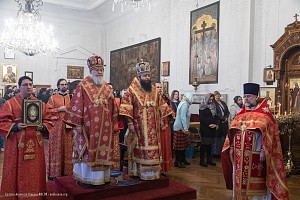