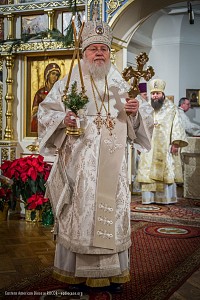 With a feeling of humble gratitude and love in the Lord, I greet you all with the "metropolis of all feasts," as St. John Chrysostom named the day of Christ’s Nativity, which we now celebrate! May God’s grace, which shines upon us from an impoverished cave in Bethlehem, and which was revealed on the banks of the Jordan, never cease to be poured out upon us, warming our hearts, which bear the sorrowful legacy of Adam, with Heavenly consolation and peace, blessing our personal, familial, parochial, and monastic lives, our daily labors, and in every benevolent, social, and especially ecclesiastical work!

May this New Year become a time of God’s goodwill and His almighty aid; may He renew and strengthen our abilities to offer up thanksgiving to Him as is meet, and to commemorate our forebears in this jubilee year of the centennial of the Russian Church Abroad!

How was the Russian Church Abroad formed? In November 1920, though defeated, many Russian Orthodox people did not surrender, and left their beloved nation’s borders; hundreds of thousands of officers and soldiers, Cossacks and peasants, landowners and workers went into exile. Departing with them were the clergy who nourished them. The archpastors and clergymen did not depart in disarray: still in the homeland, with the blessing of the Holy Hierarch Tikhon, Patriarch and Confessor of All Russia, they formed the Provisional Supreme Ecclesiastical Authority of South-Eastern Russia.

Finding themselves abroad, what could these representatives of the Russian Church do? Guided by love for the persecuted Mother Church and Canon 39 of the 6th Ecumenical Council, which addresses a similar situation, when part of the population of Cyprus had to leave their country, having "been freed from heathen slavery," the Russian hierarchs formed the Supreme Ecclesiastical Administration Abroad. Moreover, after this, the Holy Hierarch Tikhon and the Holy Synod over which he presided sent the departed émigré masses the famous Directive №362, dated November 7/20, 1920, which proved to be God-inspired. The hierarchs abroad took the first steps of their unique service in Constantinople, having received a blessing from the Locum Tenens of the Ecumenical Throne, Metropolitan Dorotheos (Mammelis), who at the time respectfully wrote to Metropolitan Anthony (Khrapovitsky) of Kiev & Galicia: "the Patriarchate permits any undertaking under your direction, for the Patriarchate knows that Your Eminence will commit no uncanonical act." Later, this Supreme Ecclesiastical Administration Abroad, reformed into the Russian Church Abroad, was transferred to Serbia, where it found itself under the truly fraternal aegis of the Serbian Orthodox Church, with whom we now share fathers and preceptors.

In 1924, when Patriarch Gregory VII of Constantinople declared his support for the Living Church schism and demanded that the Holy Hierarch and Confessor Tikhon "immediately depart from administration of the Church," many understood the fervent desire of the hierarchs of the Russian Church living abroad not to merge into the existing Local Churches, but to strive in every way to preserve their living and organic ties to the persecuted Church in Russia. Since that time, the Russian Church Abroad has followed the life of the Church in the homeland with a keen, loving, and devoted eye, rejoicing in her successes, sorrowing in her tribulations, and loudly bearing witness to her sufferings, piously reverencing the ascetic and martyric struggles of those who fearlessly went to their deaths in the name of Christ.

Marking this glorious anniversary, which will continue with the celebration of the I All-Diaspora Council next year, we intend to celebrate neither the terrible events, as a result of which many Russian Orthodox people found themselves on foreign soil, nor the bitter division of the Mother Church, which had been subjected to persecutions. The primary goal of our celebration is to lift up thanksgiving to God, Who bountifully poured out upon us His abundant mercies, and to prayerfully honor our forebears, who in complex conditions abroad held aloft the standard of our Holy Russian Orthodoxy, and relayed to us a great inheritance. May the lamps on their graves never be extinguished! Moreover, every anniversary must cause each of us to once more take interest in our history, and consider the individual people whom we commemorate. Only this approach to the jubilee celebration, combined with prayer and a humble hope in God’s aid, will grant us a renewal of our hearts, of all of our strengths, and of all of the paths of our modest service to God and man.

May our holy fathers among the saints: John, Archbishop of Shanghai, Wonderworker of San Francisco; Jonah, Bishop of Hankou; the Holy Hierarch Seraphim (Sobolev) and the Martyr Alexander (Schmorell), as well as the multitude of "everyday saints" among our forebears, be our intercessors in this renewal! And may we ourselves, adoring the Divine Infant Christ, born today in Bethlehem, ask for this all-encompassing renewal. I greet you all with His Birth, sincerely wishing that we may spend these holy days, as well as this entire jubilee year, in joy in the Lord, with our families and friends, in prayer and in the life of the Church!

With love in Christ,