Nativity Epistle of His Holiness Kyrill, Patriarch of Moscow & All Russia 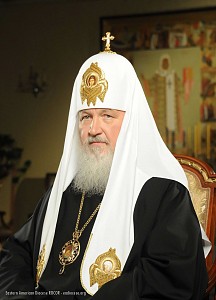 From the depths of my heart, I congratulate you all on the radiant feast of the Nativity of our Lord and Savior Jesus Christ.

The wondrous miracle of the incarnation of God, which was accomplished more than two thousand years ago, today fills our souls with ineffable joy. "Today God hath come to earth and man hath ascended to the heavens" (verse at festal Vespers). The Maker and Provider of all things has appeared in the world, for by His grace He could not "behold mankind oppressed by the devil" (from the Order of Baptism); "overcome by love, He Who is without beginning and incomprehensible came… to seek out the one who had wandered, His creature" (kontakion for the Parable of the Lost Coin by St. Romanos the Melodist).

The amazing prophecies of the great heralds of the Word of God have come true, and before humankind – which for thousands of years awaited salvation and deliverance, exhausted by the burden of sin, suffering from a curse not only during its earthly life but also in the world beyond – the gates of Heaven have now been opened. Our Lord Jesus Christ has "received flesh from her, the ever-flourishing Virgin" (canon for the Nativity of the Most Holy Theotokos), and the cherubim, guarding the entrance to paradise with a sword of fire, "withdrew from the tree of life" (verse at festal Vespers). The Divine Infant has been born for the salvation of the world, being "born under the law, in order to redeem those who were under the law, so that we might receive adoption as children" (Gal 4:4-5).

Inconceivable is the Lord’s humility: in being the omnipotent Master, He appears to people as a helpless infant; in being God, He assumes corruptible flesh and endures the afflictions of earthly life; in being the Immortal One, He goes voluntarily to His tortuous and shameful death. And He does all of this not for the select few – the prophets, righteous, and His faithful servants. Christ comes for each one of us; He desires salvation for all without exception – the sinners and the evildoers, the indifferent and the neglectful, the cowardly and the angry, even His murderers!

The Lord turns nobody away, never disdains anyone; on the contrary, He assumes our human flesh, renews it through His divine incarnation, His sufferings on the Cross and His life-bearing Resurrection; He raises it up into the bosom of the Holy Trinity and sanctifies it by His presence on the right hand of the throne of God. And it is of the life-creating body of Christ, His most pure blood shed for each one of us that we partake in the Sacrament of the Eucharist – and we become one with the same body and the same blood of not only with the Savior, but also with each other.

However, today we unfortunately see the waves of discord rocking the ship of the Church, the storm of arguments and contradictions undermining the unity of the Orthodox faithful, people, overpowered by the darkness of the enemy and tempter, discarding the Fount of living water in favor of "the source that gushed forth the turbid and undrinkable water of impious heresies" (canon to the Holy Fathers of the First Ecumenical Council). At this difficult time, we must all recall that the Lord was born, crucified, and rose from the dead for each one of us, that He founded on earth the One, Holy, Catholic, and Apostolic Church. In belonging to the Church, we are called upon to overcome discord, confrontation, and conflict, to heal divisions, to help those who endure the horrors of war, and suffer from oppression and injustice.

The Lord was born not in a royal palace, but in a lowly cave in "abject poverty." What, it would seem, could be worse than a cavern and poorer than a manger for cattle? Yet such a place does exist – it is the desert of the human heart scorched by sin, alienated from God, neither cold nor hot, wasted and enslaved by the passions. It is, however, within our power to make our soul a dwelling-place for God, to remember that the Lord is near, at the very gates, and that He humbly waits for us to finally see Him with the eyes of faith, admit Him into our lives, hear His words and respond to His love and allow Him to act within us.

The whole world rejoices in the most glorious Nativity of the Savior: the angels sing hymns of praise, the shepherds are exultant, the magi worship and bring gifts to him, and it is only the embittered heart of Herod, full of envy, that does not wish to accept the divine truth, does not rejoice, yet trembles not from the fear of God but from cowardice. Let us ponder whether we too are not like him in our deeds, whether we do not make our priority our own well-being and comfort, whether we are not afraid that someone may be better than us, more talented, kinder, whether we do not do evil to such a person in trying to hurt or humiliate him before others, cast him down from his pedestal so that we may raise ourselves up a step higher. Is it not the case that the source of truth for us is not the Lord and His sacred commandments, but our very own selves? Do we not tempt others in passing off as truth our own self-serving fantasies, do we not rend asunder Christ’s raiment through our ambitious actions, do we not sow the seeds of discord and discontent among our brothers and sisters in the Faith?

As we gaze now upon the Divine Christ Child and stand face to face with the divine truth, let us cast aside the "weight" of passions and "sin which doth so easily beset us" (Heb. 12:1), let us send up our ardent prayers for the strengthening of the unity of Orthodoxy and the increase of love, recalling that "love is kind; love envieth not; love vaunteth not itself, is not puffed up, doth not behave itself unseemly, seeketh not her own, is not easily provoked, thinketh no evil; rejoiceth not in iniquity, but rejoiceth in the truth; beareth all things, believeth all things” (I Cor 13:4-7).

The liturgical texts for the feast glorify not only the Lord Who has been born for our salvation, but also those thanks to whom His Incarnation became possible – the Most-Pure Virgin Mary, the Righteous Joseph the Betrothed, and the Holy Forefathers. Let us also remember on this solemn day those who are close to us: let us visit our parents and friends, devote our attention to them, find kind words, and thank them for all they do for us. May our hearts, filled with love of God and neighbor, become the abode for the All-Merciful Christ, who is "preëternal and unapproachable, Who is equally everlasting with the invisible Father" (sessional hymn at Festal Vespers). Amen.

+KYRILL
Patriarch of Moscow & All Russia