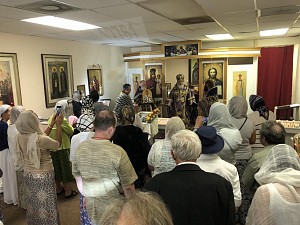 On Saturday the 14th and Sunday the 15th of March, Metropolitan Hilarion of Eastern America & New York visited the Church of the Pochaev Icon of the Mother of God in North Port, FL.

On Saturday, Priest Constantine Desrosiers (cleric of St. Xenia Church in Methuen, MA) served All-Night Vigil, with Metropolitan Hilarion anointing the clergy and parishioners at the Polyeleos. Singing on kliros were parish rector Archimandrite Stefan (Khilchuk) and parishioners. That evening, parishioners organized a warm reception for the Metropolitan and clergy.

On March 15, the Second Sunday of Great Lent, of St. Gregory Palamas, the First Hierarch of the Russian Church Abroad celebrated Divine Liturgy. Concelebrating with His Eminence were Frs. Stefan and Constantine, and Priest Daniel Sobolev (cleric of the Patriarchal Parishes in the USA). Parishioners sang the divine service.

There are many Russians and Ukrainians in North Port, who reacted joyfully to the formation of a new Orthodox parish. The church is located in a rented space in a busy area of the city:

As the Metropolitan noted, the church is decorated tastefully, with many icons adoring the walls. The first Liturgy in the church was served on December 17, 2019, the feast of the Holy Great-Martyr Barbara. The divine services are currently held on Saturday (in the evening), Sundays (in the morning), and on major feasts, which many parishioners attend from further north and south in the state, where there are no Russian Orthodox churches.

Most of the worshippers at the hierarchal Liturgy communed of Christ’s Holy Mysteries.

Upon completion of the service, Metropolitan Hilarion thanked the Lord for accomplishing our salvation, and called on the faithful to become fortified in the spiritual life through repentance, confession of their sins, fasting, and prayer, as the Holy Hierarch Gregory Palamas taught. His Eminence called on those present not to fall in spirit in these difficult days, and to abide in prayer.

Metropolitan Hilarion presented the rector with an icon of the Holy Hierarch Basil of Ostrog ‒ a saint particularly venerated in Montenegro.

After Liturgy, parishioners organized a luncheon in the church, during which cordial interaction between the clergy and parishioners continued. 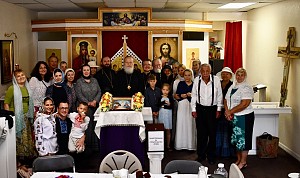