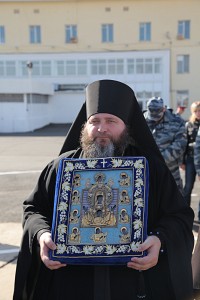 To His Eminence, the Very Most Reverend
HERMAN
Metropolitan of Kursk & Rylsk,
the Clergy and Flock of the Zheleznogorsk Diocese

Having heard of the death of His Grace, Bishop Benjamin, I hasten on the radiant days of Holy Pascha, which bolster our hope for eternal life, to express my condolences personally, along with those of the archpastors, brethren, and parishioners of the Russian Church Abroad.

The Lord allowed me to make the acquaintance of the reposed during that blessed time when he was the deputy abbot of the Kursk Root Hermitage, site of the discovery of the Kursk Root Icon of the Mother of God. His Grace first saw the wonderworking icon in the USA, while still an abbot, when he visited at the end of 2008. I remember being moved by his piety, joy, and tears of gratitude as he approached the icon of the Mother of God when he visited us. Later, the Most-Pure One would present him several more opportunities to prayerfully venerate Her image at Kursk-Root Hermitage.

I believe that the Most-Blessed Directress herself has met and escorted the soul of her servant to the eternal abodes. The now-reposed Bishop Veniamin even now rejoices over her in the mansions of the righteous, praising the Risen Christ, Giver-of-Life, together with His Co-Unoriginate Father and the Most-Holy Spirit unto the ages of ages.

Memory eternal, and may he rest with the saints!

With Paschal joy in the Risen Christ, and my earnest sympathies,