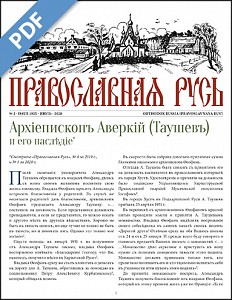 The second issue of Russian-language Pravoslavnaya Rus’ ("Orthodox Russia") has been released by Holy Trinity Publications in Jordanville, NY. This issue includes the following articles which, may be of interest to readers:

The latest issue of Pravoslavnaya Rus’ in PDF format can be downloaded at the Publications website here.

Pravoslavnaya Rus’ is published four times a year and made available free of charge, but the Publishing House needs support to keep the project going.

Donations towards the ongoing costs of production are accepted: