Epistle of Metropolitan Hilarion of Eastern America & New York, First Hierarch of the Russian Church Abroad, on the Occasion of the 50th Anniversary of the Glorification of Venerable Herman, Wonderworker of Alaska 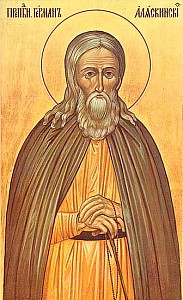 Pushkin’s chronicler Pimen, passing on his life’s work to his student, said:

"…To thee I hand my task. In hours exempt
From the soul’s exercise, do thou record,
Not subtly reasoning, all things whereto
Thou shalt in life be witness; war and peace,
The sway of kings, the holy miracles
Of saints, all prophecies and heavenly signs; ‒
For me ‘tis time to rest and quench my lamp…"

"Here is that which is most dear to the Russian people: the holy miracles of saints, prophecies, and heavenly signs. And truly, no celebration in Russia ever saw the coming together of such multitudes in Russia as the opening of new holy relics," said Metropolitan Anthony (Khrapovitsky), who 100 years ago led the Russian Church Abroad, in one of his sermons.

As we know, the stages of the glorification of a saint in Christ’s Church take place gradually. We, the archpastors, pastors, and flock, examine ourselves against the dispositions of our forebears in the Faith, and in this way the canonization of God’s saints matures and takes shape. The discussions relating to the glorification by the Church of Venerable Herman of Alaska first took place at the Council of Bishops in 1939, which was held in the cradle of the Russian Church’s diasporan wing ‒ in Sremski Karlovci. When a report on this subject by His Grace Alexis, Bishop of the Aleutians & Alaska, was being discussed, the Holy Hierarch Seraphim (Sobolev) expressed his confidence that the glorification of the Elder Herman, accomplished in the Diaspora, would undoubtedly be confirmed by the Mother Church; the other fathers at this Council, meanwhile, led by Metropolitan Anastassy (Gribranovsky), though expressing their general belief in the God-pleasing nature of the works and ascetic labors of Venerable Herman, considered it necessary to wait for a restoration of normalcy in the life of the persecuted Russian Orthodox Church. The Most Blessed Metropolitan Anastassy maintained this position in other instances, as well. When, for instance, the question of the glorification by the Church of the Righteous John of Kronstadt was raised in 1953, Metropolitan Anastassy expressed his reservations regarding the canonical basis for doing so, saying that "the sole basis on which we operate is directive №362 of His Holiness, Patriarch Tikhon, which allows us to perform the functions of ongoing Church life, but does not grant us the right to perform such exceptional acts as the glorification of saints." Nevertheless, in 1964, still during the lifetime and with the consent of the retired Metropolitan Anastassy, the Council of Bishops, having unanimously elected Metropolitan Philaret (Voznesensky), glorified the Righteous John for the consolation of the People of God living in difficult circumstances abroad, and for the strengthening of the Mother Church, which was suffering at the hands of godless persecutors. At the time, many considered this bold step by the Russian Church Abroad to be one of the spiritual fruits of the entire Russian Orthodox Church, which led to the end of the so-called "Khrushchev’s persecutions." Confidants of the departed Patriarch Pimen (Izvekov) reported that he secretly performed the service to the Pastor of Kronstadt in his residence, according to the rite adopted by the Russian Church Abroad; Metropolitan Nikodim (Rotov), the spiritual preceptor of the current Patriarch, His Holiness Kyrill, personally thanked our parishioners for this glorification when they had a rare opportunity in those days to visit the City on the Neva.

At that same time in the Western American Diocese, the Holy Hierarch John (Maximovitch), the greatest of the masterminds behind the glorification of the Righteous John, in which he was supported by the renowned hierarch and "Serbian Chrysostom" Nicholas (Velimirović), always celebrated the feast day of Venerable Herman. On the feast day of Venerable Sergius and Herman of Valaam, and on December 13/26 ‒ the traditional date believed to be the day of Elder Herman’s repose, and later, as determined by the results of further investigations, the day of his burial ‒ Saint John would serve a panihida after Divine Liturgy, which would end with the singing of the magnification for monastic saints. Taking pious part in these divine services was Eugene Rose, the future Hieromonk Seraphim, who received monastic tonsure on the feast of the Protection of the Most Holy Theotokos in 1970 at the hands of the gracious and loving Archbishop Anthony (Medvedev), the Holy Hierarch John’s successor. Archbishop Anthony, like Saint John before him, who adhered to the monastic school of Metropolitan Anthony (Khrapovitsky), labored much in the preparations for the glorification by the Church of the Elder Herman, the Righteous John, and his own predecessor in the See of San Francisco, as well as the Synaxis of New Martyrs and Confessors of the 20th century. In the case of the glorification of the Wonderworker of Alaska, great effort was also expended by the above-mentioned Hieromonk Seraphim, along with the abbot and brethren of Saint Herman of Alaska Monastery, at that time a part of the Western American Diocese of the Russian Church Abroad, who published articles about the saint and a multitude of testimonies regarding the miraculous help rendered by the Missionary Elder ‒ in Russian in the "Orthodox Herald" (Православный благовѣстникъ) and in English in the "Orthodox Word." At the celebrations of the glorification of Venerable Herman in Joy of All Who Sorrow Diocesan Cathedral in San Francisco in 1970 ‒ organized beautifully and in good order by Archbishop Anthony, in accordance with the recommendations of His Grace, Bishop Alexis, from the above-mentioned 1939 report ‒ Metropolitan Philaret presented Reader Eugene Rose and his collaborators with benedictory certificates for their labors.

We know of an incident that took place in 1842 with the Holy Equal-of-the-Apostles Innocent, future Metropolitan of Moscow & Kolomna, printed on the last page of a brochure published in prerevolutionary Saint Petersburg, entitled "The Life of the Valaam Monk Herman: An American Missionary." Sailing at the time across the sea to Kodiak Island and finding himself in danger, the Holy Hierarch Innocent, looking toward Spruce Island (the burial place of Elder Herman), turned to him in his thoughts and said, "If thou, O Elder Herman, wast pleasing to God, then let the wind change." Very soon, the wind became favorable, and safely carried the archpastor to shore, after which, in thanks to Venerable Herman for delivering him, he served a panihida.

Let us also pray to these giants of Orthodoxy in America, that the Lord might preserve the ship of our Church in this complicated time, making us worthy of that for which our forebears labored and which they created! Amen.

Asking your holy prayers, I remain in the love of the Lord,

July 27/August 9, 2020
50th Anniversary of the Glorification of Venerable Herman of Alaska