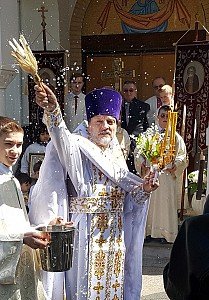 Archpriest Serafim Gan (chancellor of the ROCOR Synod of Bishops and rector of St. Seraphim Memorial Church in Sea Cliff, NY) recently gave an interview to journalists from www.pravlife.org, in which he shared his thoughts on current events in the U.S.

Recent events in the lives of Christians in the U.S. ‒ the desecration of holy sites and monuments, vandalism in and burning of churches, is alarming not only for the Orthodox Church, which carries out its service here, or for other Christian confessions, but for the country as a whole, which once was Christian and now is openly abandoning its religious roots. This is very sad, as is the fact that the things I have mentioned are barely discussed or written about in the media.

Meanwhile, I think that recent proclamations by the governor of California and the city of Toronto, Canada, bear witness to the infringement on religious rights and liberties of believers in North America, and to the interference of the government in the affairs of the Church and other religious organizations. An executive order by the former has banned choral singing in churches, while regulations by the latter have banned communing the faithful. On the one hand, we can understand that secular authorities, who do not understand anything regarding religious matters, are trying to show care for their citizens in the midst of a pandemic; but, on the other hand, they will permit mass demonstrations and gatherings of people clearly violating all hygienic requirements, allow our airlines to jampack their airplanes, and much more, including every manner of blasphemous activity, but forbid people to sing in churches or receive Communion, despite fully and faithfully adhering to all safety requirements. Add to this the fact that our clergy and parishioners have seen a very low incidence of infection.

The world, gripped by pandemic, unrest, and other crises, is in need of prayer. If, in light of this, the faithful observe common sense and all other requirements (wearing masks, keeping social distance, and so on), why should they be saddled with ever more intolerable restrictions? In our churches, for instance, we try to adhere to all of the recommendations of local authorities and even ask people in high-risk groups to refrain from attending the services. Thus, the recent decisions by the governments of California and Toronto, in my opinion, are entirely injurious to the faithful, who are trying to survive in the current difficult pandemic conditions. Archbishop Kyrill of San Francisco & Western America has reacted very well to the situation in California, publishing an open letter to the governor of that state, in which he states that the actions by authorities "prompt us to recall the era of godless persecutions in the USSR."

We can see in all of this that circumstances require us to augment our prayers and good works, to "activate" our Orthodox Christianity, while at the same time, in a disciplined way, reminding authorities that our faithful have religious rights, defending them and fighting for them. It is very important not to place all of the blame on the media or the "powers that be." This is easy and does not require any particular effort. We often like to point to their sins, shortcomings, and mistakes. It is far more difficult to, as the saying goes, to "tend our own garden." Long ago, the Apostle Paul warned us that some would not come to God because of us, Christians, that some would not join the Church, because they would not see in us genuine followers of Christ, who would shine with the light of His Resurrection, His victory over sin, evil, death, and every terrible thing that the world has made. And so, perhaps it is that recent events have not been summoned solely by the spirit of apostasy that reigns around us, but also by the fact that the lives of Christians, who are called to be "the light of the world" and the "salt of the earth," often do not conform to the Gospel ‒ "of whom I am chief." The current crisis, it seems to me, is a sign from God. And to receive a sign from God means to receive His mercy. I hope that we will be able to respond to this mercy with repentance and a correction of our lives, so that we might be deferred to more often and that Christian holy things and sites might be treated with greater reverence, and the rights and freedoms assured them by the constitutions of Western countries honored.