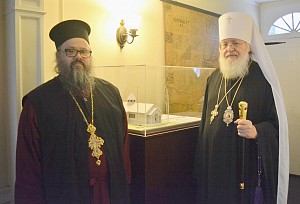 The Monastery of Saint Dionysios the Areopagite in St. James, New York is asking both for your prayers and financial help over the next six months in order to build a church dedicated to the Dormition of the Virgin Mary. An anonymous donor has generously offered to match all donations we receive for the building of the new church (up to $300,000) until December 31, 2020.

In light of this deadline, the Brotherhood graciously appeals to anyone able to donate before the end of the year.

​The Brotherhood of Saint Dionysios was forced to leave both its home and church in April of 2018 during the sixth week of Great Lent. Since then, the Brotherhood, consisting of eight tonsured monks and one novice, has been holding services in a room within the monastery building. While this small chapel is perfectly sufficient for the monastery’s private rule and daily cycle of services, on Sundays and feast days the space is packed with parishioners and local pilgrims. In some cases, they are compelled to pray outside or in the adjoining hallway, only being able to enter the chapel to receive Holy Communion.

​Architectural plans for the new church have already been drawn up; the building itself will cost roughly $600,000. And so, if we are able to raise half this amount before the end of the year, the other half will be covered through the matching fund, enabling us to begin construction early in the new year!

Photos of the building site, architectural plans, and a preliminary three-dimensional rendering are shown below. Note that the 3D model reflects an earlier iteration of the plans, which, though no longer fully accurate, provides a good general impression of the project.

Our Brotherhood is keenly aware that this is a difficult time for many people. While we ask for prayers from everyone, we know it may be difficult to actually donate towards the project. A donation of any size is sincerely appreciated; every dollar we receive before the end of the year will be doubled.

To make a donation, feel free to access our Donations page by clicking here. For large sum donations, kindly contact our Abbot, Archimandrite Maximos, at archimandritemaximos@gmail.com or (631) 721-8150.

​​With gratitude and love in Christ, ​​​​
The Brotherhood of Saint Dionysios the Areopagite 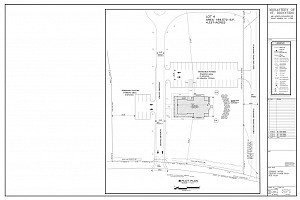