On August 27, 2010 on the eve of the Dormition of the Most Holy Theotokos, one of the senior clerics of the Eastern American Diocese, Archpriest Boris Kizenko, peacefully passed away. Fr. Boris was a longtime cleric of St. Vladimir Memorial Church in Jackson, NJ.

Archpriest Boris Kizenko was born on July 28, 1926, in the city of Kharkov. In 1950 he was tonsured a reader by Archbishop Vitaly (Maximenko). In 1956 he married Tamara I. Plyshevsky, and was then ordained to the diaconate by Bishop Anthony (Medvedev) on November 18, 1956. On the feast of the Theophany, January 19, 1957, Fr. Boris was ordained to the priesthood by Archbishop Averky (Taushev).

Fr. Boris served as rector of the Church of the Entrance into the Temple of the Holy Virgin in Syracuse, NY, Holy Trinity Church in Vineland, NJ, and served for many years as a cleric of St. Vladimir Memorial Church in Jackson, NJ. 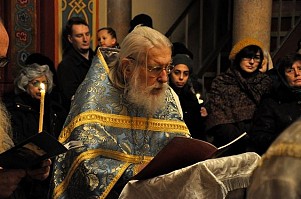 When a person is born, his first act is to cry. At that same time, his family and their friends rejoice and exult in the new person born into the world. We will return to this thought at the end of my eulogy.

The newly reposed Archpriest Boris Kizenko was born in Kharkov in 1926 on the feast of the Holy Equal-of-the-Apostles Prince Vladimir, to a faithful family steeped in the traditions of old. Of course, this child, as his life in Russia showed us, received an excellent, moral upbringing. He was born crying, and there was much for the Russian people to cry about during this terrible time of the triumph of satanic powers, which under the banner of "a new era" sought to sweep away everything holy in Russia, the very wellsprings of Russian history and culture, resolved to destroy the people’s faith in God. How was a patriotic, faithful Russian family to live in the face of these atrocities? The only path was to protect themselves from evil and secretly preserve their faith. The boy’s parents chose not to call him Vladimir, as during these days – a time of universal sycophantism – every fifth child came to be named, in honor of the "great leader," whose pseudonym it is best not to utter within the walls of a holy church. And so they named the child Boris, in honor of St. Vladimir’s son.

When young Boris turned one year old, almost that very day, the tragic, difficult times in the relationship between the faithful and the Soviet government began. So flowed then the torrents of blood of Russia’s best and brightest – clergy, monastics, and laymen – who at the turn of the 21st century would be glorified as the New Martyrs and Confessors of Russia. Churches and monasteries were annihilated, and Russia’s ancient monuments destroyed. That the conscience of the ascendant godless might not be stirred, Russia’s mighty bells were smashed to pieces. Following the martyrs were writers, poets, artists, composers – all those who desired to think freely and with honor.

And so first the child, then the adolescent, Boris grew up in these brutal surroundings. What strong convictions one must have in order to preserve one’s love and devotion to the Russian classics of the 18th and 19th centuries in schools where reading them was not without risk. But so it was that, despite the insidious times, he was fortified in the spirit of the moral testaments of our favorite writers. He especially loved Russian poetry, many passages of which he knew by heart and had committed to memory until the day that he died. His most beloved authors were Pushkin, Lermontov, and Gogol – it was with great enthusiasm that he loved to quote Taras Bulba: "There was a man!" Father Boris would say, gladly taking the opportunity to bear witness to the distinguished significance of one of Russia’s literary geniuses. Speaking of poetry, our travels to pastoral conferences and other church gatherings come to mind. We traveled in groups. Father Boris would entertain us the whole way there and back with tales of everyday life, singing Russian patriotic songs, and reciting poems, all of which poured from within him as from a cornucopia.

At the end of the Second World War, Boris Ivanovich had already taken shape as an honest and deeply religious man. His whole family traveled the difficult path of Russia’s exiles, a path of sufferings and hardships brought on by the forced abandonment of their homes, the flight into the unknown, and the iniquity and devastation surrounding them. Fate deposited these refugees in the Displaced Persons camps in Germany, where the whole family came under the spiritual guidance of the renowned Father Adrian Rymarenko. Young Boris found work with the Americans, as a result of which he was able to help supply Fr. Adrian’s community with food. His spiritual ties with the elder continued upon his arrival in America, where Kizenko settled first on the Hudson River in the village of Nyack, later moving to the convent at Novo-Diveevo. This was his first step toward the priestly calling, and he soon made haste to Holy Trinity Monastery in Jordanville, where he entered the seminary. It was then that I met him; it was my first visit to the monastery. The merry seminarian Boris was assigned to show me around the monastery, and he gladly helped acquaint me with the life and sights of the monastery. So it was that we became friends 60 years ago, for life.

Having married his humble and intelligent future matushka, Tamara Plyshevsky, who came from a pious family that had been persecuted for the faith, Boris was ordained a deacon and priest. Once a priest, Fr. Boris served many places – in Syracuse, Michigan, Vineland – but he ultimately stopped midway through his priestly service in the marvelous Memorial Church of St. Vladimir. Here he wholeheartedly took upon himself labors for the benefit of the church and parish – fortunately, he was a hard worker. He rarely took any vacations.

First and foremost, by the labors of the renowned Archimandrite Cyprian, the church frescoes were completed. Then came the construction of a rectory, whereas before the family had been confined to a little cottage. Finally, Fr. Boris built a wonderful church hall, where parishioners could now gather, talk, hold meetings and shows, as well as luncheons. Fr. Boris labored in this parish for twenty-five years, and for his good works, fifteen years ago he was awarded a miter.

Who was Fr. Boris as a person? We all remember his truly pastoral countenance, and that countenance will be remembered forever by those who knew him. This was a kind man, cheerful and loving, who co-suffered with those in infirmities. It was always very interesting holding a discussion with him, as he was an erudite and inquisitive priest, possessing of an exceptional memory and able to freely quote passages from the works of both religious and secular authors. When one thinks about the distinguished character of this affectionate man, one wishes to use the words of I.A. Ilyin and say that Fr. Boris was a man with a singing heart or the soul of a child. It was this singing heart that created his special internal melodiousness, and that marvelous, peaceful symphony in his and around him spread to everyone, calling forth smiles and joyful feelings. Rarely does one meet such people, in whom this gift radiates so naturally, without even a hint of insincerity.

We saw Father at every church conference and gathering. He would come early, armed with a notebook and pen, bespectacled, and would take a seat in the front row in order to hear better, and would be all ears. He would quickly write virtually every word and, when the speaker would conclude, Fr. Boris would be the first to raise his hand: "Your Grace, may I have a word?" after which would follow either a question, or a clarification, or an example from his own experiences. This would go on for decades. We, his co-brothers, grew accustomed to this and saw in him a desire to learn and be involved in the life of the Church, to be an active participant in it, to share the joys and sorrows of our life in the Church.

Fr. Boris needs not worry about his children and grandchildren – they are all in the church, all are tied together in familial friendship, all labor honestly, all are of a friendly, joyful disposition. Here is an example: Yesterday, after the evening service for the departed, Fr. Boris’ son, Subdeacon Seraphim, called me: "Batushka, I wanted to share something with you. I returned home from service today after bidding farewell to my father. I didn’t cry. For me it was like a feast, and I feel a real Paschal joy. I wanted to let you know." Yes, Sima, this is undoubtedly a feast for all of us – a celebration of good’s victory over evil, faith’s victory over doubt, the triumph of love over malice.

"The wind returneth again according to his circuits" (Ecclesiastes 1:6) – and it is time for us to imagine ourselves back in Kharkov in 1926. Then there was the cry of an infant and the joy of a family, but today everything is changing places: we, as one spiritual family, are in tears, while Father, as an infant, is joyfully being born in the habitation of his Heavenly Father. We believe this because in Fr. Boris we saw a man who led a righteous life, helped his neighbors, and put the faithful on the path to salvation. Let us pray for his soul and try to imitate him, while the Lord gives us time to labor and be transformed.

Today we send off our co-brother and father, and for all of us, both clergy and laymen, this is truly a source of inspiration, a call to acquire a spiritual, kind, and peaceful sentiment, to be loving, joyful, and thankful to God, transmitting the Lord’s truth to all people, that we all together, in common prayer and mutual love, might enter into the Kingdom of Heaven.