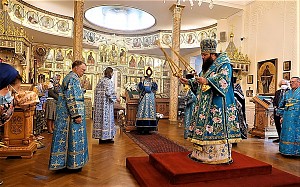 On the great feast of the Nativity of the Most Holy Theotokos, festal divine services were held in the Synodal Cathedral of the Sign in New York City. Metropolitan Hilarion of Eastern America & New York officiated the All-Night Vigil on Sunday evening, September 20, co-served by diocesan vicar Bishop Nicholas of Manhattan.

On the day of the feast, September 21, Bishop Nicholas celebrated Divine Liturgy, co-served by cathedral clerics: dean Archpriest Andrei Sommer, Archpriest Edward Chervinsky, Protodeacons Nicolas Mokhoff and Serge Arlievsky (cleric of Holy Dormition Convent "Novo-Diveevo" in Nanuet, NY), and Deacon Stefan Stoyanov. Also on this day, the Holy Church commemorates the Kursk Root Icon of the Mother of God "of the Sign," which miraculously appeared near Kursk 725 years ago.

Despite its being a weekday, parishioners gathered to pray to the Most Holy Theotokos and to commune of Christ’s Holy Mysteries.

Upon completion of Liturgy, His Grace greeted everyone with the feast, and addressed the faithful with a sermon, in which he said, in part:

"We commune at Divine Liturgy, and at that moment likewise remember the Mother of God, who gave birth to the Savior of the world, Who came to earth for each one of us. He preached, worked wonders, healed the sick, helped the poor, was unjustly convicted, was crucified, died for us, and rose from the dead. The Lord gives us His own Self, so that we might unite with Him and receive divine grace, which saves us. On such days, the greatest thanksgiving we can give to God is the celebration of the Divine Liturgy. It is as though we are giving back to God that which He has given us, saying, ‘Thine own of Thine own…’

"Today we also glorify our holy Kursk Root Icon of the Mother of God. Today she is at the New Kursk Root Hermitage in Mahopac, where they are also celebrating their patronal feast day. But most often, the icon remains here at Synod, and we thank the Mother of God for this mercy. Nevertheless, the icon sanctifies the entire world [in its travels]. The Queen of Heaven loves the people, and the people of God reverence the Mother of God in return."

Bishop Nicholas spoke about a miraculous event that took place in Moscow, which a parishioner from Saransk told him about in a letter. During the icon’s first visit to Russia in 2009 since her departure in 1920, the woman made a special trip to see the icon in the Cathedral of Christ the Savior.

"At that time, my son, who had remained in Saransk, had various serious problems," wrote the woman from Saransk. "Of course, I prayed for my son, and when I left the church, my son called me and said that the process needed to resolve his problem had begun. I started to read an akathist before the Kursk Icon. Every day for a month, I prayed. On the day when the problem was finally resolved, I looked at the calendar and was astonished to see that it was the feast of the Kursk Root Icon of the Mother of God. I felt how the Most Holy Theotokos had helped me."

Bishop Nicholas called on the faithful to remember how loving the Mother of God is as a Consoler, what a great holy icon abides among us, and to run to her intercession in prayer. In keeping with tradition, His Grace then spent time interacting with parishioners. 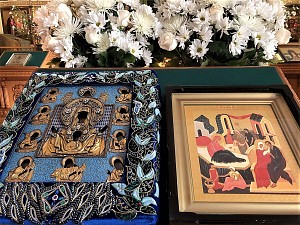