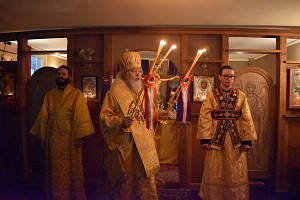 On Thursday the 15th and Friday the 16th of October, the feast of the Holy Hieromartyr Dionysius the Areopagite, the Brotherhood of St. Dionysios in St. James, NY, began the celebration of their third annual patronal feast day.

The festivities commenced at the start of All-Night Vigil on Thursday evening, with the arrival of Mother Tamara (Theodore) and Rhonda Dodson from the Monastery of the Glorious Ascension in Resaca, GA, the latter of whom was then clothed as the new novice Sister Catherine. At the end of Vigil, the Brotherhood processed to the site where a new church building will be built and planted the Cross there.

Liturgy was chanted by the Brotherhood and their guests.

Before Liturgy, Metropolitan Hilarion tonsured Evangelos Georgakopoulos and Andreas Elefteriades readers for the monastery community; at the Little Entrance, His Eminence elevated Fr. Michael to the rank of archdeacon; and after the Great Entrance, the First Hierarch ordained Fr. Vasileios to the priesthood.

Upon completion of the service, the First Hierarch presented Synodal gramotas to Maria A. Dorfman and David Kanen in recognition of their service to the Holy Church.

Metropolitan Hilarion inspired and encouraged the brotherhood with his homily on St. Dionysius the Areopagite. Fr. Maximos announced the high likelihood of building a church on the property within the next year, and that the monastery had received substantial assistance in paying off its loan. "God has plans for us and for our community," he said, even though "we went through some very difficult days to get here," and he thanked the hierarchs for their constant support. Then everyone processed to the site where the Cross had been planted the night before, and His Eminence blessed it with prayers and the sprinkling of holy water, at which point the heavens opened and it began to rain.

As those in attendance took shelter from the oncoming storm, the sisterhood of the parish laid out the feast they had prepared. The rain could not dampen the spirits of those in attendance, and a feeling of joy, peace, and fellowship permeated the air. After the festal meal, the monastery presented the hierarchs with reproductions of Fr. Silouan’s icon of St. Dionysius the Areopagite. Father Maximos toasted the bishops and again expressed his gratitude to them for their support, and to all those who served that day.

The Brotherhood would like to thank all those whose hard work and presence made this celebration a great success. 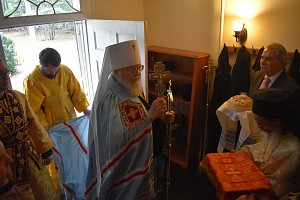