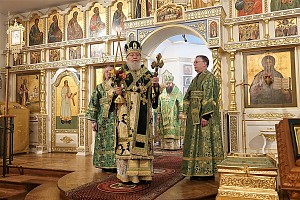 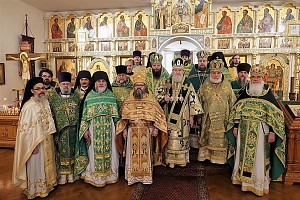 On Tuesday, November 3, when the Holy Church honors the memory of Venerable Hilarion, Schemamonk of the Kiev Caves – the Heavenly patron of the First Hierarch of the Russian Church Abroad ‒ Metropolitan Hilarion of Eastern America & New York celebrated Divine Liturgy in the Synodal Cathedral of the Sign in New York City. Concelebrating with His Eminence were Archbishop Gabriel of Montreal & Canada and Bishop Nicholas of Manhattan, as well as numerous diocesan clergy:

The service was held under the aegis of the Protectress of the Russian Diaspora ‒ the wonderworking Kursk Root Icon of the Mother of God. The Synodal choir sang beautifully. Most of the parishioners, who came to honor the memory of the saint and congratulate their First Hierarch, communed of Christ’s Holy Mysteries.

Upon completion of Liturgy, Bishop Nicholas greeted His Eminence and read aloud a congratulatory letter from Patriarch Kyrill of Moscow & All Russia to Metropolitan Hilarion on the occasion of his namesday, in which His Holiness wished the Metropolitan "physical strength and God’s unfailing aid in your archpastoral labors on behalf of the Holy Church."

On behalf of the clergy and himself, Bishop Nicholas thanked His Eminence for his prayers, instruction, good example, and kindness, and wished him God’s aid and many years.

Metropolitan Hilarion thanked the clergy and faithful for their words of congratulation and prayer, and called on them, especially in these difficult times, to pray together and support one another.

Archbishop Gabriel and Cathedral of the Sign warden Sergei Yakushin also offered their congratulations to the Metropolitan.

Fr. Nicodemus read aloud a greeting from the Administrator of the Patriarchal Parishes in the USA, Bishop Matthew of Sourozh, and wished the First Hierarch many years.

The cathedral sisterhood organized a luncheon, during which fond memories, congratulations, and sincere well-wishes were addressed to His Eminence. 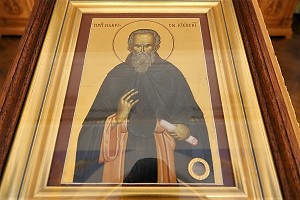