New York City: Feast of Entry of the Most Holy Theotokos into the Temple in Synodal Cathedral 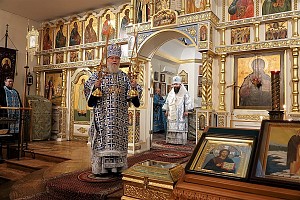 On Thursday the 3rd and Friday the 4th of December, the great feast of the Entry of the Most Holy Theotokos into the Temple was celebrated in the Synodal Cathedral of the Sign in New York City. On Thursday evening, Metropolitan Hilarion of Eastern America & New York and Bishop Nicholas of Manhattan served the All-Night Vigil, co-served by cathedral clerics: dean Archpriest Andrei Sommer, Archpriest Edward Chervinsky, Protodeacon Nicolas Mokhoff, and Hierodeacon Panteleimon (Jigalin).

Despite its being a weekday, a multitude of cathedral parishioners ‒ observing all sanitary norms ‒ gathered to pray to the Most Holy Theotokos. Almost all of them communed of Christ’s Holy Mysteries.

Upon completion of Liturgy, Metropolitan Hilarion greeted everyone with the feast and addressed the faithful with a sermon on the topic of the feast, in which he said, in part:

"The Most Pure Virgin Mary was born as the result of the fervent prayer of her elderly parents Joachim and Anna, who promised to dedicated her to God’s service. When Mary turned three years old, they took her to the Temple in Jerusalem, so that she might abide there and serve God. Many doubted that such a thing could be, since the Jerusalem Temple was designated for the bringing of sacrifices and for the residence there of the priests; but, according to the witness of the historian Flavius Josephus, there was also a residence at the Temple for pious women and virgins, who helped and prayed there.

"And thus, when her parents brought the Most Holy Virgin to the Temple in Jerusalem, the Temple high priest led her into the Holy of Holies ‒ the most important place in the Temple, into which the high priest himself could enter only once a year. And this was a very important moment, because the Virgin Mary herself became the Holy of Holies, the receptacle of the Son of God, Jesus Christ, Who came to save mankind."

His Eminence called on the faithful to sanctify themselves, following the example of the Virgin Mary, with prayer and fasting ‒ to grow spiritually, so that our body and soul might become the temple of God, as the Apostle Paul says: "Ye are the temple of God, and the Spirit of God dwelleth in you." 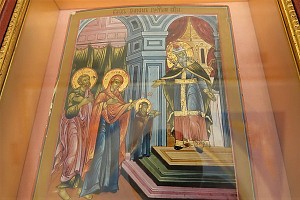 New York City: Feast of Entry of the Most Holy Theotokos into the Temple in Synodal Cathedral - 12/04/20