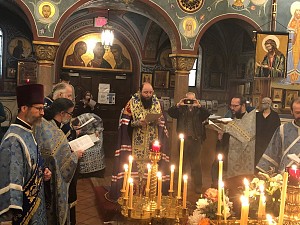 From Wednesday, November 25, to Monday, December 7, the Protectress of the Russian Diaspora ‒ the wonderworking Kursk Root Icon of the Mother of God ‒ spiritually warmed the hearts of the parishioners of St. John the Baptist Cathedral in Washington, DC and other parishes of the Eastern American Diocese’s Capital Region Deanery with her grace-filled presence.

On Thursday, November 26, the feast day of the Holy Hierarch John Chrysostom, which this year coincided with the American civil holiday of Thanksgiving, the wonderworking image was brought to St. John the Baptist Cathedral. In light of the COVID-19 pandemic, it was decided to serve two separate thanksgiving molebens and akathists that day, one another the other, to allow as many fo the faithful as possible to pray before the holy icon.

At 9:30 AM, the icon and His Grace Nicholas, Bishop of Manhattan, were triumphally greeted with the peal of bells and word of welcome from the cathedral warden, Maxim Agapov. Bishop Nicholas officiated both services, in English and Russian. In his edifying sermons, His Grace noted, in part, that this year marks the 725th anniversary of the finding of the icon and the centennial of the founding of the Russian Orthodox Church Outside of Russia. The Kursk Icon has remained with us uninterrupted throughout this entire centennial period, Bishop Nicholas said, protecting and inspiring the believers of ROCOR.

Co-serving with His Grace at the first moleben were Archpriest Victor Potapov (rector of St. John the Baptist Cathedral) and cathedral clerics: Priests Alexander Resnikoff and Damian Dantinne, Protodeacon Patrick Mitchell, and Deacon Gregory Trubetskoy. Co-serving with His Grace at the second moleben were other cathedral clerics: Archpriest David Pratt and Protodeacon Leonid Mickle. They were joined by Archpriest Nectarios Trevino (rector of Holy Innocents & St. Nina Church in Bristow, VA).

After the services, the icon was taken to the rector’s home, where Bishop Nicholas and a small group of guests were treated to a traditional Thanksgiving Day dinner. 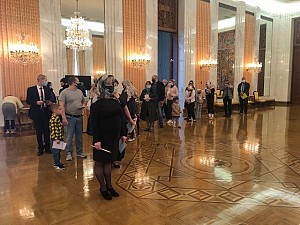 The following day ‒ Friday, November 27 ‒ the icon was invited to the Embassy of the Russian Federation. In the embassy’s large "Golden Hall," Fr. Victor served a moleben and Akathist to the Most Holy Theotokos. Over the course of four hours after the service, embassy staffers came to venerate the icon and brought with them commemoration slips with names of friends and loved ones, both living and those who have departed this life. All of the slips were read before the icon and later were commemorated at Divine Liturgy in the cathedral. Each of the staff members received a paper copy of the Kursk Icon as a gift, along with a pamphlet with the icon’s history and a small bottle fo holy water. Bishop Nicholas anointed everyone with holy myrrh from the Hawaiian Iveron Icon of the Mother of God.

That evening, Bishop Nicholas, accompanied by Fr. Victor, traveled with the Kursk Icon to the city of Baltimore, MD, where they were awaited by the parishioners of Holy Transfiguration Church, led by rector Archpriest Ion Barbus.

A moleben and akathist were likewise served in the Baltimore Church. After their shared prayer, Fr. Ion showed the visitors the parish house, which had recently been renovated by parishioners, and then treated them to supper.

At midday the following day (November 28), Bishop Nicholas, Fr. Victor, Fr. Gregory, and Subdeacon Andrei Mouravieff traveled to Virginia Beach, VA for All-Night Vigil in St. Joseph of Optina parish. The community is currently meeting in a large Orthodox Chapel of St. Theodore Stratelates ("the Commander"), located next to Annunciation Greek Cathedral. Priest Sergei Kosov, rector of St. Joseph parish, told the visitors that the community intends to purchase land in the near future in order to build their own church. 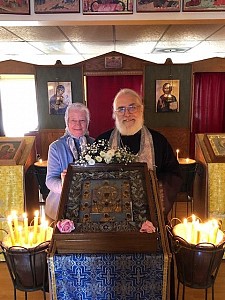 On Sunday morning, November 29, Bishop Nicholas celebrated Divine Liturgy, co-served by Frs. Victor Potapov, Sergei Kosov, and Gregory Trubetskoy. At the Little Entrance, Fr. Sergei was awarded the right to wear the nabedrennik. Praying at Liturgy, just as Vigil the day before, were parishioners not only of St. Joseph’s, but also faithful from other cities.

After the Sunday service, a luncheon was offered, which saw much brotherly interaction. It would be nice to remain with such hospitable parishioners, but a long road lay ahead: three hours to the town of Spotsylvania, VA, where the icon was awaited by His Eminence, Metropolitan Jonah, and the brethren of the newly formed St. Demetrios of Thessaloniki Male Skete. The moleben and akathist were served once more at the skete before the Kursk Icon of the Mother of God. After the service, Metropolitan Jonah showed the visitors the newly acquired building that is now home to the skete. The large house gives a very good impression and, by all indications, promises to become a renowned Orthodox spiritual center.

The Kursk Icon returned to Washington late in the evening on November 29.

On Monday, November 30, the icon visited St. Thecla Church in Kensington, MD, led by Archpriest John Johnson, and on the following day visited Holy Apostles Church in Beltsville, MD. Here, the moleben and akathist were served by the rector, Archpriest George Johnson, co-served by his son, Priest Christopher Johnson, and Deacon Christopher Capp.

Usually, when the icon visits Washington, the clergy of St. John the Baptist Cathedral travel with it to the sick and infirm; this year, however, because of COVID, they were unable to do so. Nevertheless, throughout the next several days, Fr. Victor served video molebens on his phone for those interested.

On Thursday the 3rd and Friday the 4th of December, the great feast of the Entry into the Temple of the Most Holy Theotokos, the Kursk Root Icon was in St. John the Baptist Cathedral for the All-Night Vigil and Divine Liturgy.

On Saturday, December 5, from 3:00-5:00 PM, the icon was once more brought to the church where, until the beginning of the Sunday Vigil, people were able to come to the church freely, without registering in advance, to pray before the holy icon. After Vigil, the icon remained in the church, so that those faithful who could not attend the service could have another chance offer their private prayer.

On Sunday, December 6, the final day of the icon’s visit to Washington, a farewell moleben was served before the Protectress of the Russian Diaspora after each of the two Liturgies.

On Monday, December 7, the holy image returned to the Synodal Cathedral of the Sign in New York City, where on Thursday, December 10, the patronal feast day will be celebrated. 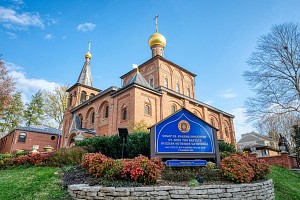