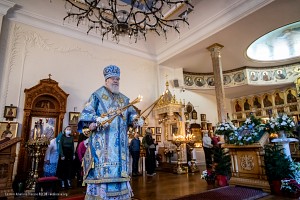 On Wednesday the 9th and Thursday the 10th of December, festal divine services were held in the Synodal Cathedral of the Sign in New York City, in honor of the cathedral’s patronal feast day ‒ the feast of the wonderworking Kursk Root Icon of the Mother of God.

The cathedral choir sang the service triumphally and prayerfully, performing works by church composter and long-time Synodal Choir director Boris M. Ledkovsky, the 45th anniversary of whose repose was commemorated this year.

As a result of the Coronavirus pandemic, participation in the services by clergy and laity was limited. Nevertheless, despite its being a workday, and in keeping with quarantine restrictions, the faithful came to pray before the wonderworking image of the Protectress fo the Russian Diaspora, and to commune of Christ’s Holy Mysteries.

Upon completion of Divine Liturgy, Fr. Serafim Gan addressed the faithful with a sermon.

"One hundred years ago, the Kursk Root Icon let Russia, and throughout these decades, she has been considered the Hodegetria ‒ the Directress or Protectress ‒ of the Russian émigré community. I recall how, in 2009, prior to the first return of the holy icon to Russia after many years, we had to conduct certain professional analyses and prepare a description of the wonderworking image. And I was interested: was the fissure still present, which had been witnessed to by the 13th century chronicler, who wrote how the icon, which had been chopped in half by the Tatars, had miraculously grown back together when the priest placed the two halves together? There is still a fissure in the center, which bears witness to the fact that the icon was hacked in two. And everyone involved in the analysis saw this fissure in the icon, which had been preserved since that time. Some felt that there would be a schism in the Russian Church, and that the Mother of God would unite what appeared ununitable. And just as the two halves of the icon were miraculously united in the 13th century, so too did the two parts of the one Russian Church, temporarily divided, once more reunite at the start of the 21st century."

Fr. Serafim called on the faithful, especially now, when we continue face enmity and every kind of division and confrontation all around us and throughout the world, to pray to the Most Holy Theotokos, whom the Church calls "an unassailable rampart and a fount of miracles."

Metropolitan Hilarion greeted the clergy and parishioners with the feast, and Bishop Nicholas, in turn, congratulated the First Hierarch on the anniversary of his hierarchal consecration, which took place 36 years ago in the Cathedral of the Sign. He thanked the Metropolitan for his fervent prayers, and assured him of his own prayers in return.

Bishop Nicholas also noted that, despite the fact that the Kursk Root Icon could not travel to Kursk this year, nevertheless the holy image visited Russia at the end of the year. This happened in Washington, when the icon was taken to the Embassy of the Russian Federation, where His Grace, along with rector of St. John the Baptist Cathedral Archpriest Victor and Matushka Maria Potapov, sang akathists to the Most Holy Theotokos for four hours before her wonderworking image.

At the end of the service, the deacons intoned Memory Eternal for B.M. Ledkovsky, and Many Years for the hierarchs. 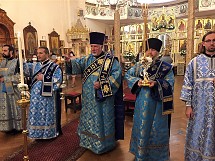