Archpriest George Larin: "The Kursk Icon of the Mother of God Protects Us, not We the Icon" 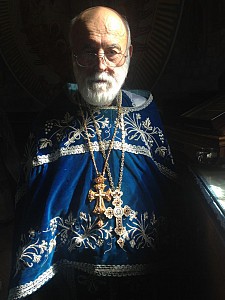 In December, the Russian Church Abroad is solemnly celebrating the 725th anniversary of the glorious appearance of the Kursk Root Icon of the Mother of God. It is one of the greatest Orthodox sacred treasures, which White Russian émigrés carried out of Russia in 1920 and which became the Protectress of the Russian Diaspora.

A quarter of a century ago, when the wonderworking icon, before which many saints and entire generations of Orthodox faithful have prayed, turned 700 years old, Archpriest George Larin was honored to accompany it on pilgrimage to Australia and South America. Today, one of the senior-most ROCOR priests recalls the most ordinary meetings that took place then, but in his unpretentious story, you can sense an ordinary miracle ‒ the miracle of faith that the Russian people, whom fate has scattered all around the world, have managed to preserve.

"I had a very joyous feeling, though I cannot even say why I was chosen. Obedience is important for me as a priest, and if the bishop says something, you have to do it. This is very important in the Church. Moreover, it was quite easy for me to fulfill such an obedience," Father George recalls.

Perhaps Fr. George was appointed for such a distinguished mission thanks to his fluency in both Russian and English, which, as he says, was not so common in ROCOR in those years. Moreover, having been born in Shanghai, and having left there for the Land Down Under when the communists took over China, he had both American and Australian passports, which made it easier to travel.

"We never had the Kursk Icon visit during my time in Shanghai and Australia, so the first time I saw it was in America, when I went to study at Holy Trinity Seminary in Jordanville," Father George says. "By that time, I already knew that many saints had prayed before this icon, as well as the soldiers who went to the Battle of Kulikovo. I knew that in the late 19th century, terrorists wanted to blow it up. The bomb seriously damaged the cathedral in Kursk, but the icon itself was unharmed. I always had a feeling of grace when I encountered it."

In Australia, every home tried to treat us

Father George said that, during the pilgrimage, people sometimes shared with him about miracles worked through prayers before the Kursk Icon, but he did not remember them.

"I did not record these stories, because I thought it was normal ‒ the Lord worked a miracle for these people!" he admitted.

But his entire narrative consists of "ordinary miracles," which perhaps happen every day and could even go unnoticed. But that does not mean they are not miracles.

Is it not a miracle, for example, how Fr. George accompanied the then-First Hierarch of ROCOR Metropolitan Vitaly (Ustinov) together with the icon on a flight from the U.S. to Australia? The flight took more than ten hours. Vladyka had a seat in first class, but Fr. George had to sit in economy and put the icon in the compartment above his head ‒ there simply was no other place for it.

But then, at the very beginning of the journey, the stewardess said there was a free spot right next to His Eminence, and offered to have Fr. George change seats.

"I spent the whole flight in a large, very comfortable seat, and there was enough room for the icon. It may seem like a small matter, but such things also happen," Fr. George says.

Of course, Australia, where Fr. George lived for nearly 20 years, stood out for him on this trip. Accompanying the icon, he visited all of the major cities, including Sydney, Brisbane, Perth, and Adelaide.

"Of course, I had a special feeling about returning to the country where I spent my youth. It was all very comforting; the people were very welcoming," Fr. George recalls.

According to Father, as they took the icon to people’s homes, every hostess tried to treat them.

"It was very difficult, but I had to accept. One woman even got offended because I had eaten at other people’s homes but was refusing her to eat at hers," Fr. George says with a smile.

The most memorable meeting, according to him, took place in Adelaide, where the doctor Peter Kalinovsky was living then. He was the author of the famous book, Transition, based on the stories of his patients who saw what happens "on the other side of life."

"When we met, I told Kalinovsky that my father-in-law ‒ the historian Yuri Vladimirovich Izmestev ‒ had read his book and was surprised to find out that he had once been an atheist," recalls Fr. George. "But Kalinovsky told me: ‘Yes, Batushka, I was an atheist. But now I do not just believe, I know that God exists. I know this from my own experience.’"

Then he spoke about how many of his patients who had actually been dead suddenly returned to life and told him what had happened during their operations. They said it was as if they were hanging in the air and saw everything from above. 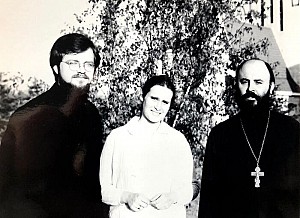 In Brazil, they told me how the Kursk Icon got into an accident, but no one was harmed

After Australia, Metropolitan Vitaly and Fr. George took the icon to South America, where they visited Brazil, Argentina, and Chile.

Fr. George recalls that people told him about miracles connected with the Kursk Icon during this pilgrimage:

"In São Paulo, one of the parishioners of the Russian church told me how one of the local priests was visiting parishes with the Kursk Icon and got into a very serious accident. The car was completely totaled, but nothing happened to the priest or the icon."

Fr. George admits that he took this story as an ordinary miracle, and you can sense the sincere faith in his words.

"I believe that the Lord is constantly working miracles. This is nothing something that stops," he says. "Every day, the sun rises and sets, the morning comes, we are alive, there is such beauty around us ‒ this is a miracle. It is just that we are used to it and do not take notice."

During this trip to South America, Fr. George noticed that the Russian Orthodox living there had a different culture in many ways, as conditioned by their environment. Many of them were moving away from their Russian roots, and even from Orthodoxy.

According to him, there were many such people in the U.S., as well.

"We called them ‘rootless John Does.’ It was the Russians who considered themselves Russian who preserved Russian culture and the Orthodox Faith there," he says.

Fr. George thanks God that, in his time in Shanghai, where he was born, his parents raised him in just such a way. As he says, "in the spirit not only of Russian Orthodoxy, but also of Russian tsardom."

One more remarkable story, important for Fr. George personally, happened during a pilgrimage with the Kursk Icon to Seattle. It was there that Archbishop John (Maximovitch), now better known as the Holy Hierarch John of Shanghai & San Francisco, reposed on July 2, 1966, while praying in front of the Kursk Icon. Fr. George was fortunate to have known Vladyka during his childhood in Shanghai.

"Vladyka really loved the Kursk Icon. He explained many things to me that I did not understand as a child, but he never spoke about the icon with me," Fr. George says. "I saw many icons in his room, a whole small iconostasis, but somehow I was not even interested in which icons they were."

"After moving to Australia, I began to withdraw from the Church, and sensing this, he wrote to me: ‘You will live, perhaps even well, but in your old age you will be disappointed that you did not fulfill your childhood aspirations of serving God, and you will not be able to fix it.’ If not for these letters, I might have lived as a rich man and died from some disease in Australia. But Vladyka’s words affected me, and I went to America to go to Holy Trinity Seminary in Jordanville."

A quarter of a century ago, the Lord brought Fr. George together with the two people who first discovered Vladyka’s body when he died. Fr. George says he will never forget this meeting.

They told him that Vladyka was praying before the Kursk Icon on the second floor of the parish house of St. Nicholas Cathedral while everyone else was preparing the meal and waiting for him downstairs. Suddenly they heard a noise, and running to him, they saw the icon on the table, and the archbishop’s lifeless body on the floor. They called for an ambulance and tried to lay him on the couch, but to their surprise, they could not pick him up, though Vladyka was not a large man.

"They said an idea suddenly overtook them then: He was so heavy because he had taken the sins of the people upon himself. They said: ‘Vladyka, forgive us.’ Then his body became light, and they were able to put him on the couch," recalls Fr. George.

As he says, this story helped him understand why St. John was always praying:

"I thought he did it because it brought him great joy. But it turns out no, he did what St. John the Baptist said when Christ appeared at the Jordan: ‘Behold the Lamb of God, which taketh away the sin of the world.’ Christ took upon Himself the sins of all of mankind and died for us. And then I realized: Vladyka prayed because he was imitating the Lord Jesus Christ Himself."

The Kursk Icon is a treasure preserved by the Lord

In this amazing story, I see a resemblance to the Kursk Icon itself. A few years ago, I had a chance to hold it for a few minutes, and it was an unforgettable feeling. I felt an incredible lightness in my soul, but at the same time, the first thing I thought was how heavy this small icon was.

"It is a great treasure, and the Lord protects it. It is of interest as an antique. It could have been stolen, but it is still with us," says Fr. George. "For example, when a bank transfers money, they hire armed guards. But we have never taken any special precautions. Ordinary people travel with the icon all around the world, and nothing happens. It is a miracle of God. The icon protects us ‒ not we the icon. O Most Holy Theotokos, save us!”