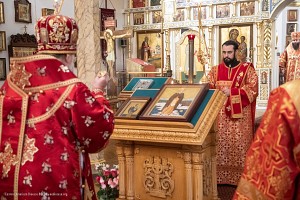 Despite the quarantine measures in place due to the Coronavirus pandemic, work with youth in the Eastern American Diocese is continuing wherever possible. For many years, the Diocese has hosted the traditional St. Herman Youth Conference on the feast day of Venerable Herman of Alaska and the surrounding days. This year, the in-person conference had to be cancelled, but the youth and clergy who work with them nevertheless honored the memory of St. Herman.

The divine services were held under the aegis of the Protectress of the Russian Diaspora ‒ the wonderworking Kursk Root Icon of the Mother of God. A mixed youth choir sang magnificently under the direction of Protodeacon Serge Arlievsky (cleric of Novo-Diveevo Convent). In order to give as many young people as possible a chance to take part in the events, the divine services were live-streamed over the Internet.

Upon completion of Liturgy, Fr. Alexis Duncan addressed those present with a sermon, talking about the saints to came to the American land to spread the Orthodox Faith, about the challenges that they faced and overcame, and about their dedication to the Lord and to their zealous missionary labors. 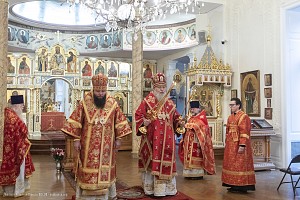