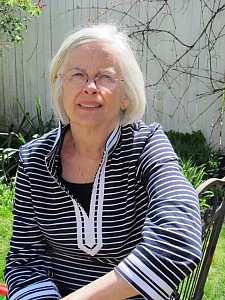 On Friday, March 5, Matushka Anna (Nancy) Crowley of St. Xenia Church in Methuen, MA reposed in the Lord after a lengthy battle with cancer.

Born Nancy Ann Nixon, Matushka was raised in a prominent Chicago family. After attending local schools, she graduated from the University of Arizona in 1970. It was a few years after college that she found her true joy, beginning a life in service and dedication to the Lord. Matushka and Father Michael Crowley met in California in 1977. They were married in April 1979. The first year of their marriage was spent living and working at the Raphael House Family Shelter in San Francisco. They next moved to Indianapolis for "five years which turned into ten," where they were the leaders of a large Christian community. These years were challenging, the fruits of which were their first four daughters and the conversion of the entire community to the Orthodox Faith.

In 1990, they moved to South Portland, ME, and took over the pastoring of a small mission parish. Matushka homeschooled all five girls through the eighth grade. They were received into ROCOR in 1994. In 2002, the call came to serve in Methuen, at St. Xenia Church. Matushka, Fr. Michael, and now five daughters would commute the 90 miles down to the parish every weekend and feast day, often staying overnight in local hotels. Since Fr. Michael held a secular job in Maine, it was not immediately possible to move permanently. Eventually, the girls finished school and university, married, and had children. One daughter lives close to St. Xenia’s and has ample room for Matushka and Father to stay.

The past ten years, especially after Fr. Michael retired from secular employment, found them splitting their time between Maine and Massachusetts, virtually surrounded by her expanding family. By the fall of 2020, they counted 14 grandchildren. Fr. Michael and Matushka Nancy made three pilgrimages – twice to Russia (2014 and 2018), and once to the Holy Land (2016). There was nowhere else in the world that she wished to go.

Matushka was diagnosed with metastatic thyroid cancer in the summer of 2019. It was an aggressive cancer and the targeted therapy proved to be just as difficult as the disease. She struggled quietly, never complaining. She fully believed that God blessed her with this for her salvation. The outpouring of love at her repose has been overwhelming. She touched the hearts of so many people both in the parish and beyond. 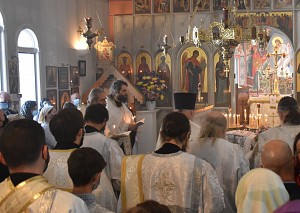