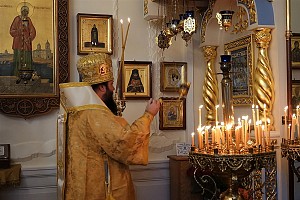 The service was held under the aegis of the wonderworking Kursk Root Icon of the Mother of God. On the eve of Great Lent, the church filled with worshippers, in accordance with established sanitary requirements.

Upon completion of the service, Bishop Nicholas delivered a sermon on the topic of Adam’s expulsion from Paradise, noting that, "we too must correct our lives, abandoning habits displeasing to God, multiplying our love for God and neighbor, and forgiving one another. Then, having traversed the arena of Great Lent, we will behold the light of Christ’s Resurrection and, with the help of our saints, can attain the state that existed between God and man before our falling into sin."

In his sermon, His Grace also spoke about the Nun-Martyr Eudocia, whose memory the Holy Church celebrates on this day. The saint lived in the 2nd century. Once, at night, she heard in an adjacent room the reading of some holy texts. She took interest and was comforted by the words she heard and that touched her heart. The next morning, she asked who had been reading. The elder Germanus came out to her and explained to her Who Christ was, why we must repent of our sins, and the meaning of salvation. Eudocia studied Holy Scripture, was baptized, entered into monasticism, and became the abbess of a monastery. The Lord gave her a special gift and blessing – by her prayers, she was able to raise the dead. The Nun-Martyr Eudocia received the martyr’s crown during the persecution of Christians in 160-170.

Bishop Nicholas spoke about the services of the first week of Great Lent, and called on parishioners to pray during these holy days and receive Christ’s Holy Mysteries on Saturday and Sunday of the fist week.

The traditional Forgiveness Sunday luncheon was held (it being the last day of Maslenitsa, or Cheesefare Week), and parishioners were able to enjoy bliny and various fillings prepared by the cathedral sisterhood.

That evening, Vespers and the Rite of Forgiveness were held in the cathedral. 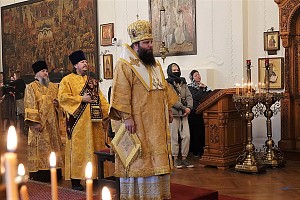