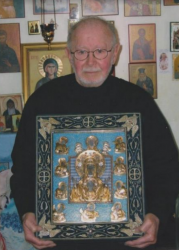 "Vovusik," as he was known to both young and old, was one of the few remaining elders from the original group of scout leaders of St. George Pathfinders of America who brought the "campfire embers" from postwar Europe to the U.S. and around the world, and then back to Russia in the early 1990s. As the eldest scout of "Tsarskoe Selo" Chapter in New York, having worn the scout kerchief for more than 75 years, Vovusik (forest name "Fleet-footed Buck") – never missed summer camp, organization council meetings, and even Nativity Yolka celebrations, as chapter director Scoutmaster Subdeacon Nicholas Pokrovsky reported. "We mourn the loss of a leader and teacher who embodied the highest level of dedication to the Church, St. George Pathfinders, and [Russia]." For several years in the 1970s, Vovusik also occupied the post of chapter director. 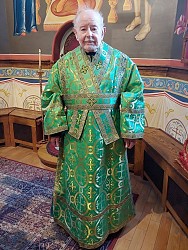 Wladimir Borisovich Fedoroff was born on July 22, 1920 in Subotica in Yugoslavia (today Serbia), and enlisted in the scouts in 1942, while his native land was occupied by Nazi forces. The scouts met underground, as the organization was outlawed. "We met Russian prisoners of war, who taught us Russian songs, and we gladly learned these songs, and sang these war songs even then, in 1942," the scoutmaster later recalled.

Subdeacon Wladimir served for many years in Holy Trinity Church in Astoria, Queens. When that parish went into schism in 2007, Vovusik, remaining faithful to the Russian Orthodox Church, transferred to Holy Annunciation parish in Flushing, Queens, and in 2014 to St. Seraphim Memorial Church. In all, he served as a subdeacon for 36 years.

It was especially sad that, as a result of the national crisis caused by the Coronavirus pandemic, from the time he was stricken, Subdeacon Wladimir could not be visited by any family, even his father-confessor, because of the emergency restrictions in NY hospitals. A panihida was held at Holy Dormition Convent "Novo-Diveevo" in Nanuet, NY on Sunday, March 29, where the funeral and burial were also held on Monday, March 30. He is survived by his son and grandson.