"Fr. Cyprian died, and we suddenly got gifts from him!" – An Unusual Story from the Life of the Main Iconographer of the Russian Diaspora 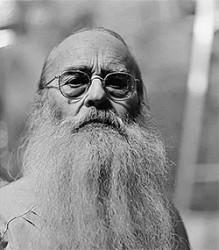 This year marks the 20th anniversary of the death of Archimandrite Cyprian (Pyzhov). The main iconographer of the Russian Diaspora, he was a spiritual pillar of the Russian Church Abroad. As His Grace, Bishop Luke (Murianka), current abbot of Holy Trinity Monastery in Jordanville, NY, tells me, Fr. Cyprian was "second leader" of the community after Bishop Laurus (Škurla), and possessed so much authority that practically all of the local seminarians chose him as their spiritual father.

Fr. Cyprian, born Kirill Dmitrievich Pyzhov in the early 20th century in Imperial Russia, traveled a long path – literally, geographically, spiritually, and artistically: he worked through half of Europe and America, from painting beer halls to frescoing churches.

As a young man, he joined the Volunteer (White) Army in Russia and departed with it to Constantinople and later Bulgaria. He then moved to France, where the future archimandrite found work as a painter, decorating restaurants and even working on a cinematic production of Don Quixote with Feodor Chaliapin in the lead role. In Nice, France, he became the spiritual son of Fr. Alexander Yelchaninov and studied iconography under his matushka, Tamara Vladimirovna.

Fr. Cyprian’s monastic tonsure took place in the renowned St. Job of Pochaev Monastery in the Czechoslovak town of Ladomirovo, where he began to paint church frescoes. After World War II, he and most of the brethren moved through Germany to Holy Trinity Monastery in Jordanville.

People who knew Fr. Cyprian well would tell me that he was a man of profound faith, strong character, great strictness, and at the same time tender love. Father could sternly rebuke his spiritual child for a sin, but always supported a person with a kind word or even a gift, explaining how he should have behaved in one situation or another.

For Reader Ilya Jarostchuk of Holy Epiphany Church in Boston, MA, Fr. Cyprian was like a family member. He baptized him as an infant, was a spiritual guide him, his parents, and brothers. He even allowed him to help paint St. John of Kronstadt Church in Ilya’s hometown of Utica, near Jordanville.

When Fr. Cyprian departed to the other world, almost the entire Jarostchuk family traveled to the monastery for his burial. Ilya is convinced that they received mementos from him. One could consider it a coincidence, but in the lives of the faithful there are no coincidences.

"The day of Fr. Cyprian’s funeral was special for all of us," said Ilya. "My father, Protodeacon Joseph Jarostchuk, had been renovating the Utica rectory beforehand, and fell from a great height onto concrete, causing a severe spinal injury. For six months, he was bedridden, and we did not know if he would ever walk again. Fortunately, Papa recovered, and Fr. Cyprian’s funeral was his first service since the fall."

Ilya’s younger brother, Alexander, had not long before been ordained a deacon, and for him this was the first service as such in the main monastery of the Russian Diaspora.

Ilya himself remembers wondering before the funeral which icon would be buried along with the most famous iconographer of the Russian emigration. Entering Holy Trinity Cathedral, he saw in Fr. Cyprian’s hands an icon of a young woman saint whom he did not recognize. Peering closer, he read the inscription, realizing it was an icon of the Royal Passion-Bearer Tatiana, daughter of the last Russian Emperor, Nicholas II.

Not long before this, Ilya had a daughter whom he named after the martyred Grand Duchess. "When I saw the icon, I felt that he had just given me a gift, a promise that he would support my daughter," remembers Ilya.

It remained to be explained, of course, why this specific Royal Martyr was chosen, who was not at the time as venerated as today. One of the closest students of Fr. Cyprian, Archbishop Alypy (Gamanovich; +2019), provided the answer during his eulogy. From the ambo, he recounted how the priest had resisted the idea of glorifying the Royal Family, and so could not bring himself to paint their icon. According to him, St. Tatiana once appeared to Fr. Cyprian and asked "Why do you doubt, and do not recognize us? Do not fear, take upon yourself the painting of this icon." After that, the iconographer changed his opinion toward the Royal Passion-Bearers and painted the requested icon.

Soon after Archbishop Alypy’s sermon, the procession of the cross began, and the open casket was taken outside.

"Then I thought," said Ilya, "my father, my brother, and I got gifts. What about Mama?"

Literally within seconds, a paper fell at the feet of Ilya and his mother – it was the prayer ribbon that was blown off of Fr. Cyprian’s forehead. Ilya’s mother picked it up and asked what to do with it.

"Mama was worried, she thought to return the prayer ribbon to the priests, but I immediately realized what had just happened and said, ‘This is Fr. Cyprian’s gift to you.’ No one bothered to look for it," said Ilya. "When Fr. Cyprian would come over for dinner, Mama would spend a lot of time with him and helped him a great deal. Maybe this sounds brazen, but I think that he wished to give her something personal, and right then, at the funeral, my thoughts were answered."

Ilya later told his father about it, and the prayer ribbon is now kept among other sacred family heirlooms.

"I often think that Fr. Cyprian was like our family’s guardian angel. You know that you will have to reveal your sins to him, and you feel ashamed," admitted Ilya. "This feeling gave strength not to commit some foolish act. Yes, he punished us for our sins, but he was always very loving."