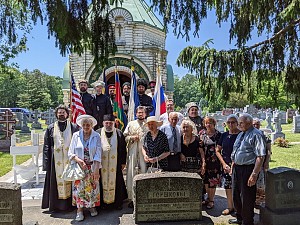 On June 6, the Sixth Sunday of Pascha, of the Blind Man, the faithful gathered at St. Vladimir’s Cemetery in Jackson, NJ for a panihida at St. John the Baptist Chapel to commemorate the victims of Lienz. The service was officiated by Archpriest Boris Slootsky, co-served by Priest Anthony Williams and Protodeacon Paul Drozdowski (all clerics of St. Alexander Nevsky Cathedral in Howell, NJ).

An honor guard was present, holding Russian and American flags, as well as the banners of the Kuban, Don, and Terek Cossack Voiskos. Also coming to pray at the annual commemoration for the departed were survivors of that terrible event, including the Ataman of the Kuban Cossack Voisko Abroad, Alexander M. Pewnew.

Afterward, a memorial luncheon was then held at the Kuban Cossack Hall in Howell, at which time guests were also invited to visit the conjoining Cossack Museum. 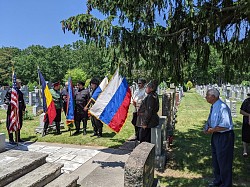