The journey of one of the Russian faithful’s most beloved saints – Blessed Matrona of Moscow – to America began at the end of February when, with the blessing of His Holiness Kyrill, Patriarch of Moscow & All Russia, Abbess Theophania of Holy Protection Convent in Moscow gifted an icon with a piece of the relics of the Blessed Eldress Matrona to the faithful of the Eastern American Diocese. The icon was brought to New York City on February 27 by Archpriest Alexandre Antchoutine, rector of Holy Intercession Church in Glen Cove, NY, and dean of New York, Long Island & the Hudson Valley, and Florida. The holy icon would later be transported to Florida.

The faithful turn to St. Matrona (lovingly called by the diminutive "Matronushka" by the people) in sickness and daily struggles, when things go wrong at work or in school, with housing or in family life. The power of this saint to help is remarkable. Perhaps that is why the flow of worshippers to venerate her relics at Holy Protection Convent never stems. There are many people in Florida from Moscow, St. Petersburg, and other places in the former Soviet Union – immigrants and tourists, who revere St. Matrona and wish to venerate her relics.

And so Pascha passed, and on the radiant feast of the Lord’s Ascension, after celebrating the festal Liturgy, Fr. Alexandre traveled with the icon to LaGuardia Airport, overflowing with those thirsting for travel after the pandemic.

Forecasters predicted storms on the way to Florida. The plane took off an hour and a half late, and only arrived in Fort Lauderdale after dark. The following day, the feast of the Holy Hierarch Luke of Crimea (like St. Matrona, also our contemporary), the icon was to be brought to her new residence: Three Hierarchs Church in Hollywood, FL.

On Friday, June 11, parish cleric Archimandrite Siluan (Lembei’s) phone was ringing off the hook – the faithful were calling and asking when the icon would arrive in Florida and what time it would be at the church. The priest calmed the people: the icon would come and take up its new residence. Toward evening, a multitude of the faithful – not only from Miami and its environs, but also from places in Florida much further away – began to arrive at Three Hierarchs Church, in order to greet and prayerfully welcome the holy icon. 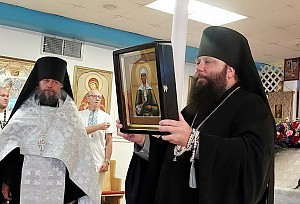 Receiving the icon of St. Matrona from Fr. Alexandre, Bishop Nicholas of Manhattan (vicar of the Eastern American Diocese and rector of Three Hierarchs Church) blessed the church, the surrounding grounds, and the gathered faithful.

A sign on the back of the icon reads, in Russian: "With the blessing of His Holiness Kyrill, Patriarch of Moscow & All Russia, this icon of Blessed Matrona of Moscow with a piece of her holy relics is presented to the Deanery of Florida of the Eastern American Diocese of the Russian Church Abroad. 2021."

The vicar bishop entered the church, once more blessed the faithful, and placed the icon on an analogion, where the image of Blessed Matrona remained for the rest of Matins – upon completion of which His Grace anointed parishioners with holy oil from the relics of St. Matrona – and throughout the following morning, when Fr. Alexandre celebrated Divine Liturgy, co-served by Florida clergy: Fr. Siluan, Archpriest Roman Galben (chaplain of Paideia Classical Academy in Coconut Creek), and Priest Demetrio Romeo (cleric of St. Andrew the First-Called Mission in Daytona Beach). After Liturgy, Fr. Alexandre delivered a sermon on the life and miracles of the blessed eldress.

Both meetings with parishioners: that of Bishop Nicholas on June 11 and the other clergy on June 12 – concluded with a luncheon, lovingly prepared by the parish sisterhood, and interaction between those gathered. Conversations at lunch were held in Russian, Ukrainian, English, and Spanish. So it was also after the parish’s founding in 1962. Its founders were immigrants to America from Eastern Europe, who collected money, purchased the church building from a Protestant group, converted it into an Orthodox temple, and then purchased two adjacent houses and land. They considered not only the present, but also what might happen if money ran out, that future parishioners might have a source of income to support the church. 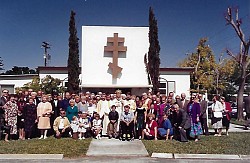 From the time of its founding, the church was under the jurisdiction of the Orthodox Church in America, but when parishioners were told to transition to the New Calendar, the parish council decided to remain on the old style, and transferred under the omophorion of the Carpatho-Russian Church (Ecumenical Patriarchate).

The parish was an active one; services were held in Church Slavonic. Parishioners included Russians, Ukrainians, Slovaks, and other immigrants from Eastern Europe. Among the parish’s founders still living are Mary Kulik and the relative of the famous Russian composer Sergei Rachmaninoff – Elaine Rachmaninoff Murin. She is currently 86 years old.

With time, however, most of the parishioners assimilated, and no longer understood the divine services. It was decided to perform part of the services in English, and then transition to English entirely. But it was too late. Newly arrived Russian immigrants were invited to join the parish, but these wanted services in Russian. The number of parishioners slowly declined, and the church began to fall into disuse.

At a certain point, the diocese expressed its intention to sell the church building. But the founder had prepared for this, as well: the parish bylaws included a stipulation that the church could not be sold so long as a single parishioner would continue to attend, and the church continued to pay its diocesan dues.

Among the few that still attended were Kerry (Seraphim in baptism) and Larisa Johnson. He is an American, while she is from Ryazan in Russia.

"Our whole American life had taken place in this church," Larisa related. "When I first arrived in Florida, Kerry and I searched for an Orthodox church in the phonebook. And we found Three Hierarchs. Kerry was baptized here. We were married here. Kerry became the treasurer and would attend church even when the services were being read by the laity. He would regularly pay dues to the diocese and effectively saved the church from being sold.

"The most important thing is that we have four walls and financial support, which the first parishioners took care to leave us," Larisa continued. "There is a lot of land around the church, where we can hold various events."

For four years, the parish rented the church building to an Ethiopian Orthodox community, and prayer continued to be offered here. Later, the parish appealed to the hierarchy of the Russian Church Abroad. The handful of parishioners also heard about Fr. Siluan – a monk serving in the mission in Orlando, and asked that he be assigned to the church.

Fr. Siluan was ordained 26 years ago in Holy Dormition Monastery in Volhynia in Ukraine. In 2020, on the feast of the Dormition of the Most Holy Theotokos, he was assigned as a cleric of Three Hierarchs Church. Since then, regular services have been held in the church, and work has been ongoing to repair and adorn the building: the refectory was completed, the ceiling replaced, a kitchen installed, and hand-painted icons placed in the church.

"Fr. Siluan is no slouch; he is always working in the church. He has a golden heart," parishioners have said of the priest.

Three Hierarchs Church is open daily on weekdays from 1:00-9:00 PM, and on feast days and Sundays from 10:00 AM to 2:00 PM. Every day at 6 o’clock in the evening, with the exception of the eves of feasts, Fr. Siluan serves an akathist.

So it was here from Moscow, through New York City, that the icon of the saint came, and now Blessed Matrona resides here with her holy relics – fortifying, comforting, and instructing parishioners, helping the parish to grow and once again become the house of God it was in the very best of its years. 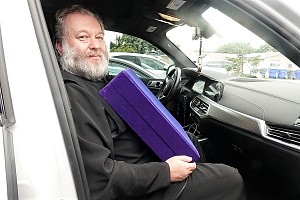