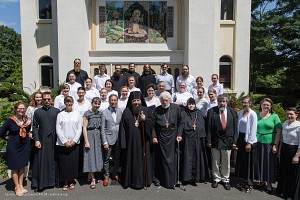 The Synodal Summer School of Liturgical Music held its annual session at Holy Dormition Convent "Novo-Diveevo" in Nanuet, NY from July 18-31, 2021. On Saturday, July 31, in honor of the completion of the summer session, a thanksgiving moleben was served in the main St. Seraphim Cathedral, led by Eastern American Diocesan vicar Bishop Nicholas of Manhattan. Praying in the church was Archpriest Andre Papkov (cleric of the Mid-American Diocese, chairman of the Synodal Liturgical Music Commission, and director of the Summer School). Prior to the COVID pandemic, the school was traditionally held at Holy Trinity Monastery in Jordanville, NY.

Irene Freeman, Elena Forrest and Juliana Wojtenko all received certificates of successful completion of the Synodal Liturgical Music School. For three summers, the graduates attended the intensive two-week program of study, and were awarded diplomas from a school enjoying prestige throughout the Orthodox world.

This program was founded in 1991 with the blessing of the late Metropolitan Laurus (Škurla; +2008) to raise the quality of church singing in the parishes of the Russian Orthodox Church Outside of Russia. The school welcomes students from all Orthodox jurisdictions, and also non-Orthodox students who wish to acquaint themselves with Russian Orthodox music. The full course of study consists of three (3) two-week summer sessions.

In recognition of the fact that many people come to wishing to improve their knowledge of church singing without necessarily becoming conductors, the School introduced a new specialization, in which students may be certified as "Church Singers" instead of pursuing the traditional "Conducting" track (which remains in place).

In addition, in 2018, in recognition of the Church-wide importance of the work carried out the by the school, the ROCOR Synod of Bishops declared it to be a Synodal Institution, with its own board of advisors, and blessed its renaming as the Synodal School of Liturgical Music.