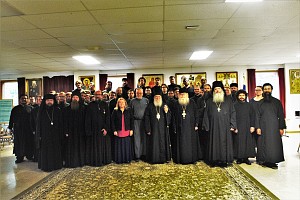 Holy Trinity Orthodox Seminary in Jordanville, NY opened the 2021-22 academic year on Wednesday, September 1, reaching the exciting milestone of having a total of 40 students on campus. This student body includes nine new graduate and five new undergraduate students. Thirty-two of the students are from ROCOR, and eight are from other Orthodox jurisdictions.

Orientation for the new students took place on Monday the 30th and Tuesday the 31st of August. On Wednesday, September 1, following Divine Liturgy, a moleben was served by His Grace, Bishop Luke, the seminary rector and monastery abbot, together with monastery clergy, to begin the academic year. His Grace then met with the entire student body.

First, a blessing was given to all new students to wear the cassock, which includes the wearing of belts by the undergraduate students. This was followed by opening remarks and sound advice from His Grace. Among many other things, Bishop Luke addressed the fact that each new student has come to seminary as a result of making the important choice to apply and – upon acceptance – to attend seminary. His Grace stressed that this blessing carries a great responsibility, stating that once the students put on the cassock, their behavior, actions, and remarks are all a reflection on Holy Trinity Seminary, and that this needs to be considered at all times, including when they are off-campus, and to always comport themselves accordingly.

In addition, Bishop Luke stated that these formational years will bring blessings as well as temptations, the latter of which may include an unhealthy preoccupation with media in general, and of over-indulging in social media in particular. His Grace suggested eliminating, or at least minimizing, their daily exposure to these temptations during their time in seminary, and strongly encouraged cultivating the habit of prayer, as well as of reading in general.

Welcome and introductory remarks were then given by seminary Dean Nicolas Schidlovsky, who spoke at length regarding the many positive developments at HTS in the recent years, including the addition of Living Liturgy to the curriculum last year, and the growth and evolution of that program for this upcoming academic year.

Bishop Luke has appointed Hierodeacon Theodore (Stanway; HTS classes of ’17 & ’21) to the position of Deputy Dean of Students. Fr. Theodore’s responsibilities involve overseeing and coordinating many aspects of student life in the dormitory.

The 5th annual convocation then took place. This event was open to the public. There, His Grace and Dean Nicolas gave added welcome remarks. The featured aspects of this event included each faculty member introducing themselves and giving a synopsis of their own education, as well as the subject(s) they each teach at the seminary (visit the faculty list page for an overview here). In addition, each new student had an opportunity to introduce themselves and, if they chose, to speak a bit about themselves and their home parish.

Protodeacon Victor Lochmatow was then recognized upon his retirement as Associate Professor of Russian Literature and Church Slavonic at the seminary, and thanked publicly for his near 50 years of teaching. At commencement this past June, Fr. Victor (HTS class ’67) was awarded the Patriarchal Order of Venerable Seraphim of Sarov 2nd Class in recognition of his 45 years of diaconal service (which was celebrated in December 2019), as well as for his many years of tireless work and the devotion to the monastery and the seminary from a very young age.

That afternoon, a job fair was held, during which each department head spoke about opportunities for the undergraduate students to apply for a wide variety of optional ‘work-study’ jobs, by which students can earn up to a $1,000.00 credit per semester that is then applied as a discount to their room and board fees. This program is in addition to the usual shared obediences.

Thursday, September 2, marked the first day of classes. Glory to God for the successful beginning of this 2021-22 academic year! 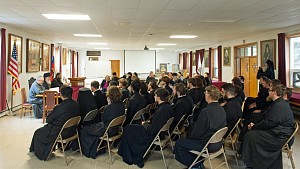