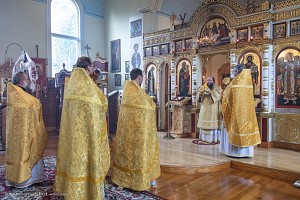 On Saturday, October 30, the feast day of the Holy Unmercenaries and Wonderworkers Cosmas & Damian in Cilicia, Bishop Nicholas of Manhattan paid an archpastoral visit to the eponymous church in Passaic, NJ, where he led the parish’s patronal feast day.

The services were sung by a male choir under the direction of Nikodim Buryakov. The service proceeded triumphally and prayerfully, and many communed of Christ’s Holy Mysteries.

After a short moleben, on behalf of His Eminence, Metropolitan Hilarion, Bishop Nicholas awarded a diocesan gramota to Alexander Lapin & Olga Kubrak for their fervent and exemplary service to the Church.

After Liturgy, a bountiful festal luncheon was held, during which the interaction between the clergy, parishioners, and guests continued. 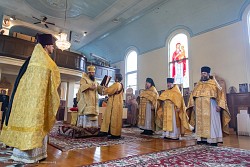