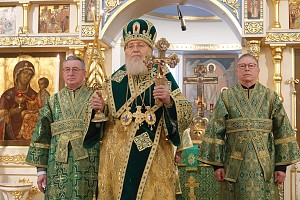 Schemamonk of the Kiev Caves, the Heavenly patron of the First Hierarch of the Russian Church Abroad was commemorated in the Synodal Cathedral of the Sign in New York City.

The service was held under the aegis of the wonderworking Kursk Root Icon of the Mother of God. The Synodal choir sang wonderfully under the direction of Vadim S. Gan. A multitude of parishioners who came to honor the saint and congratulate their First Hierarch communed of Christ’s Holy Mysteries.

Upon conclusion of Liturgy, Metropolitan Hilarion expressed his gratitude to all those who had gathered to pray in church. Bishop Nicholas congratulated His Eminence and remarked that the entire Diocese rejoices, glorifying the Heavenly patron of their Metropolitan, wishing him strength and fortitude for many more years to instruct the clergy and believers with kind words and his good example.

Metropolitan Hilarion was then greeted by Metropolitan Joseph, who expressed his joy on the occasion of their combined prayer at the Holy Altar and noted that, when he first met Metropolitan Hilarion many years ago, he immediately felt an affinity to him – as a man of prayer and an honest and pious persion. On his namesday, His Eminence presented Metropolitan Hilarion with an icon containing pieces of the relics of the Holy Hierarchs Tikhon of Moscow and Raphael of Brooklyn, as a sign of unity between the Russian Church Abroad and the Church of Antioch.

On the occasion of the First Hierarch’s namesday, a reception was held in the cathedral hall, during which memories and heartfelt wishes were addressed to Metropolitan Hilarion. 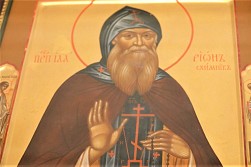