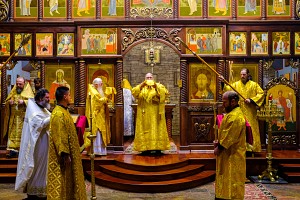 From October 22-24, His Eminence, Metropolitan Jonah (Paffhausen), officiated the divine services in honor of the Holy Elders of Optina – the patronal feast of the eponymous skete founded a year ago at St. Mary of Egypt Church in Roswell (Atlanta), GA.

On Thursday, October 21, with the blessing of the First Hierarch of the Russian Church Abroad, His Eminence Hilarion, Metropolitan of Eastern America & New York, Metropolitan Jonah tonsured Patrick Davis into the lesser schema, giving him the name Gabriel, in honor of Venerable Gabriel of Georgia. He vested Andrew Smith as a Rassophore Monk with the name Alexei, in honor of Venerable Alexis the Man of God.

After the Eucharistic Canon, Monk-Subdeacon Gabriel was ordained a deacon.

Upon conclusion of Liturgy, Metropolitan Jonah congratulated all with the patronal feast of the skete, and especially noted the growing number of those considering joining the brotherhood.

After Liturgy, Fr. Tryphon delivered a sermon dedicated to the Church being a hospital for the soul. 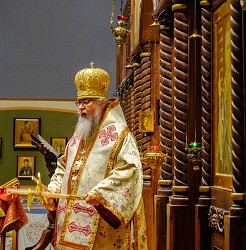