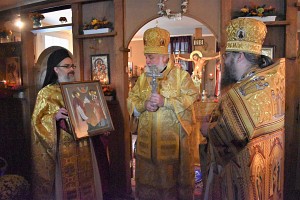 During the Hours, Archbishop Gabriel tonsured Demetrios Zirogiannis a reader and awarded him the right to wear the orarion.

Upon conclusion of Liturgy, His Eminence delivered an edifying sermon on the Gospel reading of the day, tying its aspects to our current world. The Brotherhood then presented Archbishop Gabriel with an icon depicting St. Maximos the Confessor and St. Dionysius the Areopagite holding a representation of the church the Brotherhood hopes to build.

Afterward, the sisterhood provided an abundant luncheon, where the brethren and parishioners were able to sit and talk with Archbishop Gabriel. The parishioners were all very glad to have met and interacted with His Eminence. Before leaving, the hierarchal guest was given a tour of the monastery and its grounds. 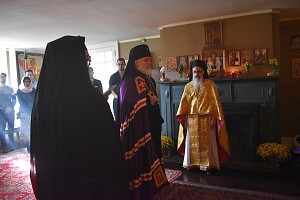