Florida: Icon of the Mother of God "Softener of Evil Hearts" visits Churches in Hollywood and Pompano Beach 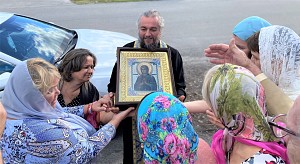 On Friday evening, December 3, the myrrh-streaming icon of the Mother of God "Softener of Evil Hearts," accompanied by parish cleric Archimandrite Siluan (Lembei) and its guardian Sergei Fomin, arrived at Three Hierarchs Church in Hollywood, FL. The holy image was greeted by a large number of the faithful. The day prior, local television aired a segment on the icon, as a result of which faithful from other cities int the state joined parishioners in praying to the Most Holy Theotokos. "There was a crowd here like on Pascha," attested parishioners, who shared their impressions after taking part in the moleben.

On Saturday, December 4, the great feast of the Entry into the Temple of the Most Holy Theotokos, Fr. Siluan celebrated Divine Liturgy in the presence of the myrrh-streaming icon. Upon completion of Liturgy, a procession was held around the church with the icon. The holy image remained in the church until 3 o’clock, with people coming in steadily to venerate it. On both days, all who came to venerate the icon were anointed with myrrh from it.

All of the faithful stood on their knees as they bade the icon farewell. When Fr. Siluan placed the image on the heads of the faithful, an unbelievable sweet aroma filled the church. The fragrance continued in the car, as the priest and the icon’s guardian traveled with it to St. Luke the Blessed Surgeon Church in Pompano Beach. The icon was streaming myrrh abundantly; as Sergei exited the car, he found that the myrrh had exuded in large quantities onto is clothes.

The holy image was greeted at St. Luke Church by representatives of the parish sisterhood. Archpriest Nicholas Bargoot (rector of St. Panteleimon Church in Lantana, FL) and local clergy served a moleben. All who attended were anointed with holy myrrh. The resurrectional All-Night Vigil was then served, at the conclusion of which the icon departed for St. Nicholas Church in Palm Coast.

Florida: Icon of the Mother of God "Softener of Evil Hearts" visits Churches in Hollywood and Pompano Beach - 12/05/21