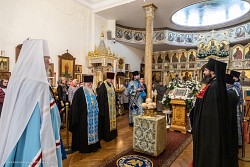 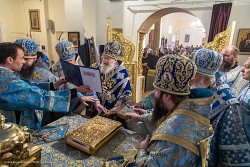 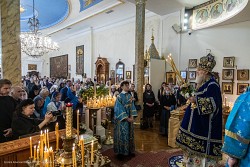 On Thursday 9th and Friday the 10th of December, solemn services were held in the Synodal Cathedral of the Sign in New York City in honor of its patronal feast – that of the Kursk Root Icon of the Mother of God. In keeping with established tradition, the celebrations were held at the conclusion of the session of the Synod of Bishops of the Russian Church Abroad, attended by its First Hierarch Metropolitan Hilarion of Eastern America & New York, Metropolitan Mark of Berlin & Germany, Archbishop Kyrill of San Francisco & Western America, Archbishop Gabriel of Montreal & Canada, Bishop Irenei of London & Western Europe, and Bishop Nicholas of Manhattan. This time, for the first time since the beginning of the coronavirus pandemic, the meeting of the Synod was held in-person.

Divine Liturgy on December 10 was celebrated by Metropolitan Hilarion, co-served by the aforementioned archpastors. Concelebrating with the hierarchs were:

The service to the Kursk Root Icon of the Mother of God of the Sign, as it is celebrated in the churches of the Russian Church Abroad on her feast days, was composed by ROCOR parishioner V.K. Hoecke, with the blessing of the first First Hierarch – the Most Blessed Metropolitan Anthony (Khrapovitsky).

During the service, the choir of the Synodal Cathedral sang solemnly under the direction of conductor Vadim S. Gan. This year, marking the centennial of the founding of the Russian Church Abroad, the choir sang spiritual compositions and harmonizations by composers who served in ROCOR – including the founder of the Synodal Choir, composer Boris M. Ledkovsky, as well as other composers from the Russian Diaspora who made a worthy contribution to the treasury of the Russian church singing tradition: Metropolitan Philaret (Voznesensky), Bishop Gabriel (Chepur), I.A. Gardner, K.A. Sander, M.S. Konstantinov, and others.

The festal Liturgy was simultaneously held under the aegis of two sacred icons: the Protectress of the Russian Diaspora – the Kursk Root Icon of the other of God – and the myrrh-streaming icon "Softener of Evil Hearts" from Moscow.

During Liturgy, Archimandrite Job (Bandmann), cleric of the monastery of St. Job of Pochaev (Germany), was consecrated as Bishop of Stuttgart, vicar of the Diocese of Berlin and Germany.

Despite it being a weekday, numerous believers from different states gathered for the celebrations, praying in front of the icons and receiving Christ’s Holy Mysteries.

"With fraternal love we congratulate you, blessing your emergence onto the path of hierarchical service in firm hope that you will justify our election!

"When the Holy Apostles, receiving the Holy Spirit, began to establish the Church of Christ, they gave themselves continually to prayer, and to the ministry of the word (Acts 6:4). In this way they clearly determined the sphere in which they were to labor. Care for the souls of believers was their main goal: as lively stones, they are built up a spiritual house (I Peter 2:5) and the temple of God, where the Spirit of God dwelleth (I Cor. 3:16).

"This of course is the lofty ideal of service and care for the soul, to which we all, servants of the Church of Christ, are called upon to strive for. Edifying was the service of your predecessors of the Stuttgart Vicariate of blessed memory: Archbishop Paul (Pavlov) and Archbishop Agapit (Gorachek). Preserving the memory of their goodness and gaining consolation by their service, I hope that His Eminence, Metropolitan Mark of Berlin and Germany, the clergy, and the flock of the German Diocese will find in you, too, much for which to be grateful."

The Protodeacon intoned the polychronion to His Holiness the Patriarch and the hierarchs, including their newly ordained concelebrant.

On the same day, Archbishop Gabriel was awarded the Order of the Kursk Root Icon of the Mother of God, 2nd Class, for his many years of zealous service to the Holy Church and in connection with the 25th anniversary of his episcopal consecration.

A festal banquet was held in the cathedral hall. Addressing those gathered, Bishop Nicholas expressed his hope that next year, the Kursk Root Icon will once again be able to resume its foreign pilgrimages and take part in the festivities in Kursk.