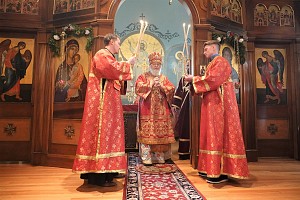 On December 18-19, the 26th Sunday after Pentecost and the date when the Holy Church commemorates the Holy Hierarch Nicholas the Wonderworker, Archbishop of Myra in Lycia, Metropolitan Hilarion of Eastern America & New York paid an archpastoral visit to St. Nicholas Church in Stratford, CT.

The clergy and parishioners were offered spiritual consolation by the visitation of the myrrh-streaming Icon of the Mother of God "Softener of Evil Hearts," currently traveling through the Eastern American Diocese.

At the Little Entrance, for his dedicated service to the Holy Church, Metropolitan Hilarion awarded Fr. Dimitri the jeweled cross.

Fr. Dimitri later spoke about the history of the cross he was awarded with: "This cross was first awarded in 1932 by Metropolitan Dionysius of Warsaw & Volhynia to Archpriest Platon Zakidalsky (who would serve in Passaic, NJ upon his arrival in the U.S.). Fr. Platon knew my grandfather, Fr. Yevgraf (Eugraphus) Jakimowicz, dean of the Volhynia Governorate, who endured much suffering and exile. He gave him that cross as a gift. In the last years of his life, Fr. Yevgraf served in Holy Protection Cathedral in Rovno. He reposed on the feast of the Annunciation in 1957, in the altar during Matins."

The church was filled with parishioners, who came to honor the memory of their church’s Heavenly patron, as well as to pray before the wonderworking icon of the Most Holy Theotokos. Many communed of Christ’s Holy Mysteries.

After the Eucharistic Canon at Liturgy, the First Hierarch of the Russian Church Abroad performed the diaconal ordination of Subdeacon David Dutkanicz. The newly ordained Deacon David will fulfill his service at St. Nicholas Church.

Upon completion of the service, Metropolitan Hilarion greeted the clergy and faithful with feast and spoke about the veneration of St. Nicholas throughout the world. His Eminence congratulated Fr. David and Matushka Maria Dutkanicz, and wished them God’s strengthening grace in their difficult service to the Holy Church.

The clergy and faithful then drove to a nearby banquet, where parishioners were presented awards and interaction continued. 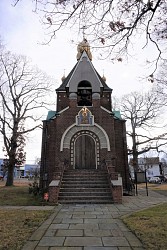