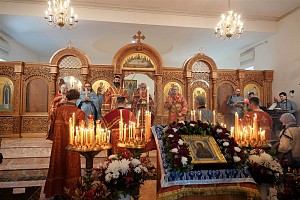 The myrrh-streaming Icon of the Mother of God "Softener of Evil Hearts" has concluded its visit to the American East Coast. On the eve of its return to Moscow, the holy image was present for Divine Liturgy in Holy New Martyrs & Confessors of Russia Church in Brooklyn, NY.

The church was filled with worshippers, who came to venerate the myrrh-streaming image of the Most-Holy Theotokos. Most of these communed of Christ’s Holy Mysteries. Upon completion of Liturgy, the rector addressed the faithful with a sermon, calling on those present to turn in prayer to the Mother of God for their every need.

Fr. Serge thanked the icon’s guardian, Sergei Fomin, for bringing the wonderworking image, and expressed his hope that the icon would once more visit the churches and monasteries of the East Coast, as it has traditionally done in previous years.

That day, the new church warden, Subdeacon Ihor Zayets, was administered the oath of office.

The parish sisterhood organized a lenten luncheon for the clergy and faithful.

The holy image remained in the church until 3 o’clock in the afternoon, during which time faithful from various churches in the city came to venerate it, after which it departed for Moscow. 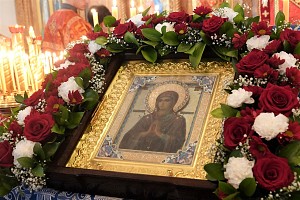