Jordanville, NY: Bishop Luke officiates Divine Services for Exaltation of the Cross of the Lord in Holy Trinity Monastery 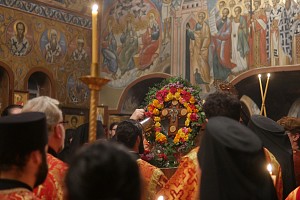 On Monday the 26th and Tuesday the 27th of September, the great feast of the Universal Exaltation of the Cross of our Lord, Eastern American Diocesan vicar Bishop Luke of Syracuse officiated the festal divine services in Holy Trinity Monastery in Jordanville, NY.

Co-serving with Bishop Luke was the monastery clergy. Singing at the services was the seminary choir, under the direction of Deacon Nicholas Kotar.

A liturgical particularity of the feast of the Exaltation of the Cross of the Lord is the bringing out of the Lord’s Cross to the center of the church at the end of the Great Doxology, to the singing of the Trisagion.

On Saturday evening, accompanied by the clergy, Bishop Luke brought the Cross out from the altar and performed the Rite of the Exaltation, during which aromatic water is poured over the face of the Holy Cross to the repeated singing of "Lord, have mercy!" After the Rite, the clergy and faithful venerated the Life-Creating Cross.

The monastery has an immense blessing in having in its possession innumerable relics of saints. One of the most treasured relics is a piece of the Precious and Life-Creating Cross of the Lord. It is set in a beautifully carved wooden ornamented cross, which belonged to the ever-memorable Archbishop Averky (Taushev; +1976), when he was an archimandrite in the Carpathian Mountains area of northwestern Hungary, before World War II. Eventually, His Eminence used his cross for the setting of the wondrous relic, which itself was placed in a larger Maltese-shaped cross, and which is used in the monastery for feasts of the Cross, especially the Exaltation. 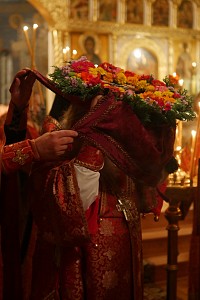 Jordanville, NY: Bishop Luke officiates Divine Services for Exaltation of the Cross of the Lord in Holy Trinity Monastery - 09/27/22