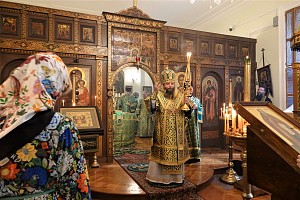 On Saturday, October 8, the feast of the Repose of Venerable Sergius, Abbot of Radonezh and Wonderworker of All Russia, Metropolitan Nicholas of Eastern America & New York celebrated Divine Liturgy in St. Sergius Church at the Synodal Headquarters in New York City.

The Synodal choir sang beautifully under the direction of Vadim S. Gan. Virtually all of the parishioners praying on this festal day communed of Christ’s Holy Mysteries.

Upon completion of the service, Metropolitan Nicholas and the clergy served a short moleben before the icon of Venerable Sergius of Radonezh.

His Eminence greeted the clergy and faithful with the feast and, in his sermon, noted in part the historicity of the building in which St. Sergius Church is located.

"The most important thing is that this is the temple of God, here prayer is lifted up daily, the Bloodless Sacrifice offered. And that is why this place is a holy place. When the priest prays on weekdays, there are not many people in church. Despite this, the angels pray here. They sanctify and protect our church, our building and, we believe, our city, as well. It is loud and chaotic outside, but here there is prayer. This prayer from a pure heart rises up to God from every one of us. Venerable Sergius also prays with us today and asks for help and blessings for all of us from God, and from us ‒ to further continuation this prayerful, salvific labor; and that we sanctify this place, this church, the cathedral, the chancery, and other rooms and offices with God’s grace."

His Eminence called on the faithful to lift up their prayers to Venerable Sergius, to thank him for the protection he and other saints give us, and to attend the services, to pray and to support our church and the Synodal Headquarters.

Metropolitan Nicholas awarded Fr. Andrei Sommer with a commemorative pectoral cross for his labors on behalf of the Holy Church and the cathedral. He presented the warden of the Cathedral of the Sign ‒ Sergei Yakushin, who was celebrating his namesday ‒ with a commemorative inlaid icon.

The Polychronion was intoned for all those celebrating their namesday.

Metropolitan Nicholas reminded those present that this was also the namesday of Synodal benefactor Serge Semenenko, and intoned "Memory Eternal" for him.

A festal luncheon was organized for the clergy and parishioners in the cathedral hall, during which their interaction continued. 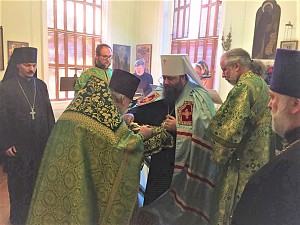