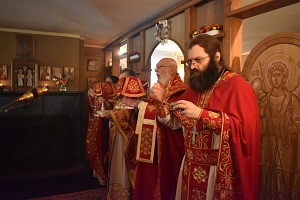 The choir was beautifully led by the brotherhood’s Monk Elias, with an assistance from Readers Demetri Zirogiannis and Evangelos Georgakopoulos.

Fr. Maximos delivered a wonderful sermon, wherein he spoke about St. Dionysios and his teachings. He exhorted us to find peace in our hearts, stating, "If we do not have peace in our hearts, we will not be at peace with our brothers and sisters. We cannot control the state of the world, we cannot control what is going on outside, but in our community, our group, the people we interact with, if we have this internal peace and peace with our brothers, then we have peace with God. And God will give us the power to transform ourselves. St. Dionysios is one of the first, in his writings, to describe theosis, deification, in very simple words, he says it is to become as much like God as possible. Dear brothers and sisters, this is what we are called to do: to become as much like God as possible, by emulating the virtues, by acquiring wisdom, by acquiring peace and then, dear brothers and sisters, we can acquire eternal life with eternal peace in the bosom of our God."

Most of the parish received Christ’s Holy Mysteries, along with 10 children and 8 babies. The people attending the service represented a truly international Orthodox group: there were Americans, Greeks, Georgians, Bulgarians, Serbs, Russians, Ukrainians, Romanians, Chinese, Indians, Hispanics and Latinos… all brothers in Christ!

At the end of Liturgy, Fr. Maximos greeted the faithful with the feast and thanked all of the visitors for their shared prayers. Fr. Vasileios, on behalf of the brotherhood, announced that New York State finally approved the plans for the monastery’s new church. With God's help, the brotherhood hopes to have the new church built by the next patronal feast.

After the service, the ladies of the parish provided a bountiful feast for everyone to enjoy. The weather was warm, the food was abundant and dessert was plentiful. Toasts were made to the guests and to the fathers of the monastery. The brotherhood gifted Fr. Maximos a new jeweled cross in appreciation of his care for them.

The brotherhood also congratulated Hieromonk Vasileios on the anniversary of his ordination to the priesthood, who was ordained on the feast by Metropolitan Hilarion of blessed memory. 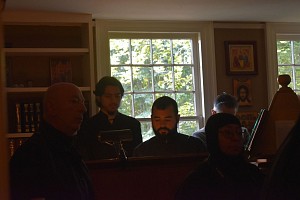