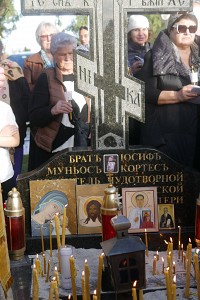 Monday, October 31, marked the 25th anniversary of the martyric death of Brother José Muñoz-Cortés, guardian of the myrrh-streaming Montreal Iveron Icon of the Mother of God.

As usual, the Cathedral of St. John the Baptist in Washington, DC sponsored a pilgrimage to Holy Trinity Monastery in Jordanville, NY to commemorate the anniversary. This year, being a jubilee year, two buses came from the nation’s capital with pilgrims. Another bus arrived with pilgrims from Holy New Martyrs & Confessors of Russia Church in Brooklyn, NY and St. Alexander Nevsky Cathedral Lakewood NJ. Of course, many cars also made the trip to celebrate together this commemorative date.

With the pilgrims also arrived His Eminence Nikoloz (Nicholas), Metropolitan of Akhalkalaki, Kumurdo & Kars from Georgia, as well as Deacon Nectarios Yangson, who brought with him the myrrh-streaming Hawaiian Iveron Icon. For fifteen years, this icon has been giving off huge amounts of myrrh. It was no different this weekend: on Saturday, during the panihida at the grave of Brother José, the myrrh poured forth and covered the analogion holding the icon.

The monastery was also blessed with the presence of His Eminence Nicholas, Metropolitan of Eastern America & New York, First Hierarch of the Russian Church Abroad. This was his first visit as the newly elected Metropolitan. He officiated the services, along with His Grace Luke, Bishop of Syracuse and abbot of the monastery.

The usual schedule for such pilgrimages was followed with the All-Night Vigil on Saturday evening and Divine Liturgy on Sunday morning. The church on Sunday was packed, even more than on Pascha, with most of the pilgrims availing themselves of Christ’s Holy Mysteries. There was truly felt a grace-filled atmosphere, enabled by the Hawaiian Icon of the Mother of God.

So that their presence would not be a burden to the brotherhood, the parish from Washington, as always, brought many platters of pre-prepared food, which was enjoyed by all those present.

After lunch, St. John the Baptist parish sponsored a small conference about Brother José. Before departing for home, another panihida was served at Brother José’s grave.

The following evening and day, the monastery celebrated the memory of the Holy Apostle and Evangelist Luke, Bishop Luke’s patron saint. This was also done in the presence of the myrrh-steaming icon, which remained at the monastery all week. Interestingly, Bishop Luke pointed out that, without this apostle, we would also not have the Iveron Icon, as according to tradition, it was he who painted the original Iveron Icon, found on Mount Athos.

Bishop Luke celebrated Liturgy on Monday morning, co-served by monastery clergy. Due to the presence of the icon, there were many pilgrims as well as neighbors at the services. At the end of Liturgy, a short moleben was served, followed by breakfast.

His Grace treated the brotherhood and seminarians to a delicious lunch. At the end of the meal, following some warm greetings from Metropolitan Nicholas, Archimandrite Theophylact (Clapper-DeWell) greeting the abbot in the name of the brotherhood, seminary teachers, seminarians, pilgrims, and neighbors.

Following lunch, in the seminary hall, there was a reception with desserts for the community and visiting pilgrims. Fr. Theophylact presented Bishop Luke with a hand-painted icon of Venerable Paisios the Athonite from the brotherhood. The seminarians also presented His Grace with a gift close to his heart: Abbot Cyprian (Alexandrou), who organized the reception, also organized a choir of seminarians who sang a Greek spiritual hymn about living in the desert.

During this week, the brethren expect to have the icon present at further church feasts, as well as on the namesday of our beloved Metropolitan Hilarion of blessed memory, on which day Metropolitan Nicholas expects to celebrated Divine Liturgy. 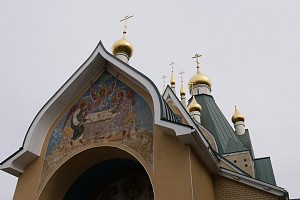