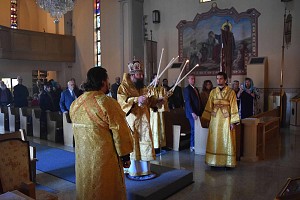 On Saturday the 12th and Sunday the 13th of November, Metropolitan Nicholas of Eastern America & New York paid an archpastoral visit to Dormition of the Blessed Virgin Mary Church in McKeesport, PA. The visit of the First Hierarch of the Russian Church Abroad coincided with the celebrations of the 105th anniversary of the parish’s founding.

On Saturday evening, parish rector Archpriest Dimitri Ermakov officiated the All-Night Vigil, co-served by visiting clergy. Metropolitan Nicholas prayed in the altar and anointed the faithful. A light meal was offered after the service.

On Sunday morning, Metropolitan Nicholas was greeted by parish warden Robert Barron with the traditional bread and salt, along with kind words of welcome.

The Hours were read by Reader Luke Kwasniewski. At the Sixth Hour, Reader Nicholas Petrochko was ordained a subdeacon, and parish altar server Dimitri D. Ermakov II was tonsured a reader.

At the Little Entrance, Deacon Andrei Garine was elevated to the rank of protodeacon.

The parish choir sang beautifully and prayerfully under the direction of choir director Nicholas Kloszewski.

Fr. Dimitri and Matushka Natalia were then presented with a diocesan gramota for their dedicated service to the parish and the Holy Orthodox Church.

A grand banquet was held in the afternoon and was attended by many parishioners and friends of the parish. Master of Ceremonies Stephen Tomkowitz reflected on some of the highlights of parish history. He noted that the parish had been blessed to have a very stable parish life and said that, since 1935 to the present, the parish has had only three rectors (Archpriest Peter Kreta 1935-1970, Archpriest Dimitri H. Ermakov 1970-1999, and Archpriest Dimitri D. Ermakov 1999-present).

At the end of the festivities, Metropolitan Nicholas presented Fr. Dimitri a beautiful jeweled cross commemorating the centennial of ROCOR (1920-2020). 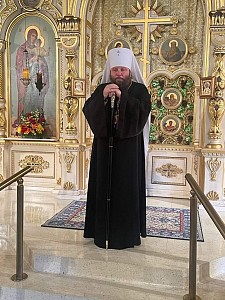