New York City: On Feast of Entry of the Theotokos into the Temple, Metropolitan Nicholas celebrates Liturgy in Synodal Cathedral 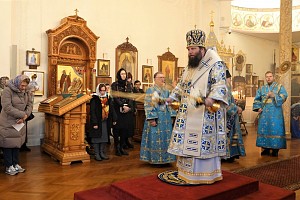 The clergy and faithful of the Synodal Cathedral of the Sign in New York City celebrated the great feast of the Entry of the Most Holy Theotokos into the Temple. On Saturday the 3rd and Sunday the 4th of December, Metropolitan Nicholas of Eastern America & New York, First Hierarch of the Russian Church Abroad, officiated the festal All-Night Vigil and celebrated Divine Liturgy. Concelebrating with His Eminence were cathedral dean Archpriest Andrei Sommer, Protodeacon Nicolas Mokhoff (cathedral cleric), and Hierodeacon Panteleimon (Jigalin; diocesan cleric).

The Synodal choir sang prayerfully under the direction of conductor Vadim S. Gan.

The services were held under the aegis of the Protectress of the Russian Diaspora – the wonderworking Kursk Root Icon of the Mother of God. Praying at Liturgy was a multitude of parishioners, many of whom communed of Christ’s Holy Mysteries.

Upon completion of Liturgy, Metropolitan Nicholas addressed the faithful with a sermon on the feast, in which he said, in part:

"We are preparing in these days for the Nativity of Christ. Already yesterday and today we heard the marvelous words: ‘Christ is born, glorify Him!’ Christ came to earth to save every man. God is love: He loves us and wants for us to be with Him, that we might be saved and rejoice in the Lord.

"How often on this earth do we wish to accomplish something, become somebody, obtain something, acquire prosperity and joy, and we put all of our efforts into making it happen.

"But today’s feast shows us what is most important. The parents of the Most Holy Maiden Theotokos – the Righteous Joachim and Anna ‒ waited a long time for the birth of their daughter, hoped on God’s mercy, showed patience and humility and, when they were already steeped in old age, the Lord heard their prayer, their longing, and sent them a blessing – the Most Holy Virgin Mary.

"The Most Holy Theotokos gave birth for us to a Son ‒ God. And today she enters the Temple. Her parents fulfilled the oath that they gave to God – to dedicate their child to Him.

"Fulfilling their promise, they brought the Maiden to the Temple in Jerusalem; they invited their friends and relatives – this was a joy, after all, when children were brought to the Temple! All rejoiced and were amazed as the Maiden ascended the steps into the Temple herself, where the High Priest received her and led her into the Holy of Holies."

His Eminence reminded them that the Most Holy Virgin is an example for parents ‒ how to raise up children with love for God, one another, and the church, where we have the Sacraments, the icons ‒ one of the most honored and beloved by us being the Kursk Root Icon, which for more than 725 years has been showing us the path to God.

The cathedral sisterhood organized a festal luncheon for the clergy and faithful, during which their interaction continued. 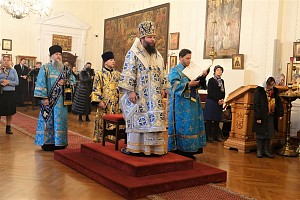 New York City: On Feast of Entry of the Theotokos into the Temple, Metropolitan Nicholas celebrates Liturgy in Synodal Cathedral - 12/04/22