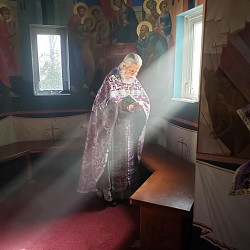 On Monday, December 19, the feast of the Holy Hierarch Nicholas the Wonderworker, Priest Eugene Solodsky reposed in the Lord after a length illness. He was 85 years old.

Fr. Eugene was ordained on March 19, 1967 by Metropolitan (future Patriarch) Pimen of Krutitsy & Kolomna in Moscow’s Holy Theophany Yelokhovo Cathedral. According to his brother priests, he was a pious man of prayer, zealous of the divine services, and tried to serve as often as possible.

After his arrival in New Jersey, he served as acting rector of the neighboring Holy Trinity and St. Nicholas Churches in Vineland and Millville, respectively. He later transferred to the jurisdiction of the Patriarchal Parishes in the USA, attached to St. Andrew Naval Cathedral in Philadelphia, PA.

Fr. Eugene was predeceased by his Matushka Anna on May 26, 2017. They are survived by their three daughters: Vera ‒ who conducts the choir at Holy Trinity Church ‒ Anna, and Maria, along with their children.

The funeral will be held on Wednesday, December 21, in the above-named church. The burial will take place at nearby Holy Protection "Novaya Kuban" Cemetery in Buena.

Fr. Eugene was born in 1937 in the Dnepropetrovsk Oblast. He graduated from Kiev Theological Seminary in 1958 and then Moscow Theological Academy in 1962. After graduating from the academy, he was assigned to Holy Theophany Patriarchal Cathedral in Moscow, and then St. Nicholas & St. Michael Church in Balashikha in the Moscow Oblast.

Fr. Eugene had an oratorical gift. People would come to hear his sermons. For this, through the course of many years, the Soviet authorities exerted blatant pressure on the Church hierarchy to prevent Fr. Eugene from being given his own parish. Having lost all hope of earning his living as a priest, Fr. Eugene decided to leave the Soviet Union. Upon his arrival in the U.S., Fr. Eugen served in the parishes in Vineland, Millville, and Philadelphia.

Fr. Eugene was also an artist, and painted many works on religious themes. Father’s life in America was not a calm one. He had to endure much, but he considered it his sacred duty to contribute in every possible way to the dissemination of the Word of God everywhere the opportunity was offered. His faith in God and trust in God’s will were unshakable. Father would flee from every praise and award people would offer him. In his final years, Fr. Eugene was very ill, but he never missed a church service. Overcoming his pain, he served until the end of his days.