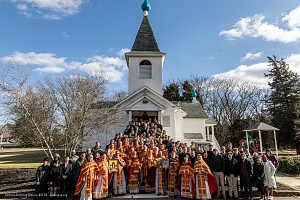 On December 25, the Sunday of the Holy Forefathers and feast of Venerable Herman of Alaska, the St. Herman Youth Conference continued in Holy Trinity Church in Vineland, NJ with hierarchal Divine Liturgy, celebrated by the First Hierarch of the Russian Church Abroad, Metropolitan Nicholas of Eastern America & New York.

Co-serving with His Eminence was Archbishop Gabriel of Montreal & Canada, as well as:

During the Hours, parishioner Kyril Kavetsky was tonsured a reader.

Leading the choir of conference participants was Protodeacon Serge Arlievsky (cleric of Holy Dormition Convent "Novo-Diveevo" in Nanuet, NY). Adorning the icon stands throughout the church were flower arrangements created by the youth during the conference.

The church was filled with parishioners and local pilgrims who came to lift up their prayers before the Protectress of the Russian Diaspora – the wonderworking Kursk Root Icon of the Mother of God.

Before Holy Communion, Fr. Theodore delivered a sermon on the topic of the Sunday Gospel reading, as well as the life of the patron saint of the youth conference – Venerable Herman of Alaska.

Upon conclusion of Liturgy, Metropolitan Nicholas greeted Archbishop Gabriel, the gathered clergy, and conference participants, urging them to remain steadfast in the Holy Orthodox Faith.

A group photograph was taken on the steps of the church, after which all once again gathered in the church hall for a luncheon.

The conference was made possible by a generous grant from the Fund for Assistance (FFA) to the Russian Orthodox Church Outside of Russia, which has been faithfully supporting the three St. Herman Conferences held every year in December: on the East Coast, in the Midwest, and on the West Coast, as well as by donations from the Eastern American Diocese and several parishes, who support this work with the youth with an open heart.

In the second half of the day, conferencegoers were able to develop questions on the topic of ecclesiastical and social issues.

A final banquet was held in the church hall masterfully prepared by the parish sisterhood. A bonfire was held outside, with youth embracing old and new friends before heading to their rooms and departing back to their home parishes early Monday morning, December 26. 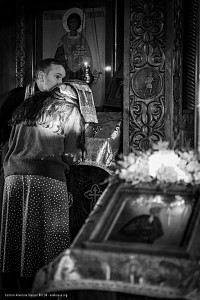