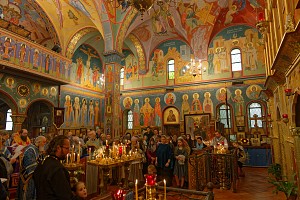 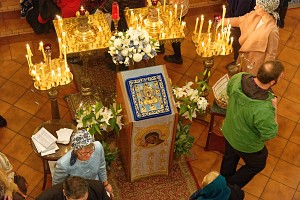 For nine days, from November 27-December 5, the Kursk Root Icon of the Mother of God, one of the most ancient icons of the Russian Orthodox Church (1295), visited St. John the Baptist Cathedral in Washington, DC as well as other parishes and communities of ROCOR in our vicinity. Parishioners labored long in preparing for the greeting of the wonderworking icon. News of the forthcoming visit was announced early, informing as many parishioners as possible of the opportunity to pray before the icon.

Five years ago, the First Hierarch of the Russian Church Abroad, Metropolitan Hilarion of Eastern America & New York, appointed Thanksgiving Day and the following week as the period of the annual visitation of the Kursk Root Icon to Washington.

His Grace, Bishop Nicholas, guardian of the wonderworking icon since 2010, arrived in the capital on Wednesday evening, November 27.

Booklets with the text of the akathist to the Mother of God in two languages were distributed to all, in order to follow and respond with the choir.

Friday, November 29, began with the baptism of infant Michael, Fr. Serge Kotar’s newest grandchild, whose daughter recently moved to Washington with her husband for work. After lunch, the icon visited infirm and elderly parishioners who were not able to come to the church to venerate the icon.

The next day, November 30, Archpriest Ion Barbus (rector of Holy Transfiguration Church in Baltimore, MD) brought the icon to his parish, where the Orthodox faithful were awaiting it in the large city north of Washington. A moleben and akathist was served there. The icon returned that evening to Washington, where Bishop Nicholas led the All-Night Vigil in St. John the Baptist Cathedral.

On Sunday, December 1, Bishop Nicholas brought the icon to Holy Apostles Church in Beltsville, MD, where he celebrated Divine Liturgy. After the service, Bishop Nicholas returned to New York in order to prepare for the upcoming meeting of the ROCOR Synod of Bishops. The icon remained in Washington, at the home of Archpriest Victor Potapov.

The first half of Monday, December 2, included visiting infirm parishioners. At lunchtime, the icon was brought to the parish of the Holy Myrrhbearers in Harrisonburg, VA.  The next day, December 3, the icon was brought to where the future church will be built. At sunrise, a prayer before the Mother of God was said, entreating help in the proposed project. At 11:00 AM, the icon returned to Washington, and Fr. Victor continued to visit sick parishioners.

On December 3-4, the great feast of the Entry of Theotokos into the Temple, the All-Diasporan icon was present for the divine services in St. John the Baptist Cathedral.

On the evening of Dec. 4, the holy icon visited the new mission dedicated to Holy Great-Martyr Thecla in Kensington. A moleben and akathist were served at this new ROCOR mission, led by Archpriest John Johnson, former cleric of the cathedral.

That same evening, Bishop Nicholas returned to Washington to bring the icon back to New York.

On December 5, Bishop Nicholas, guardian of the holy icon, departed for the home of the Mother of God – the Synodal Cathedral of the Sign in New York City.

Thus concluded the fifth annual visit of the Protectress of the Russian Diaspora to the capital of the United States. It is hoped that this joyous, grace-filled tradition will continue yearly.

O Most Holy Theotokos, come to our aid! 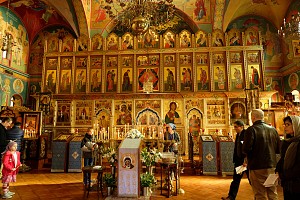